Former Councilman Jesse Fukushima, reincarnated as a Realtor after his failed bid for mayor, is now finagling to make permanent a law that allows construction of an additional dwelling unit (ADU) on agricultural land.

The oft-extended ADU law was set to expire in 2009, but was extended until Dec. 15, 2014 for what was supposed to be the absolute last time. Now Jesse wants to make it permanent, with no expiration date.

What it essentially does is let people convert their guest house right into a full second home. These “entitlements” are then used to create CPR (condominium property regime) lots, which help the realtors make money, while subsequently driving up the cost of ag land so it's too expensive to farm.

Ag CPRs also come with all sorts of associated problems, such as inadequate infrastructure to handle the density, disagreements among landowners who have tenancy in common (a boon for attorneys) and the gentrification of ag land. They've also contributed to the proliferation of illegal vacation rentals.

Though the ADU provision was initially promoted in 1989 as a way to help the poor — sob — locals trying to provide housing for their kids, giving rise to the misnomer “ohana unit,” the reality has been far different.

As Michael Levine reported in The Garden Island back in 2009:

The council debated the original purpose of the legislation, agreeing for the most part that “the intent of the bill has been lost.”

While many members said the sixth extension — for five full years, to Dec. 15, 2014 — should be the final one and spoke out against inappropriate land use, when it came time to vote, the measure passed unanimously Wednesday morning.

“Ag zoned lands should be for ag purposes, and we should keep that in mind,” [former Councilman Kaipo] Asing said, criticizing the original idea and all the subsequent extensions to it. “What have we created?” he asked, referring to transient vacation rentals and second homes along Hanalei Bay.

Yet here we are again.

In an email circulated by Chris Hayden, Jesse writes:

Through the grapevine, some of the council members have been approached with the request to have this item be placed on the council's agenda.

We have received responses from Council Chairman Jay Furfaro, councilmembers Ross Kagawa and JoAnn Yukimma [sic] and their sincere interest to work with our efforts.

How interesting, especially since Levine quoted Jay as saying, back in 2009:

“This is the compassionate way to close the door.” Furfaro said he has no intent to revisit the issue in five years and he sees the extension as an “exit strategy” to help bring county law back into compliance with the General Plan.

As for JoAnn, well, she apparently “got it” back in 2006 when she introduced an amendment with the language:

While well-intentioned, this law … has caused the unintended consequences of residential growth on lands not primarily intended for residential use, and has thwarted one of the main goals of the Kauai County General Plan to “limit and control the dispersal of residential and urban use within agricultural lands” By not insuring that infrastructure could be available to qualifying lots before they were granted the privilege of applying for an additional dwelling units, the law has distorted the planning process and created a demand for infrastructure that is not in accordance with orderly community development.

The Kaua`i County Council finds that it is critical to terminate the ADU law and stop the creation of new Agricultural and Open lots entitled to apply for additional dwelling units. To not terminate the ADU law would be to encourage land use patterns that will be expensive to service and to live in. It will generate low density sprawl that could destroy the rural character and agricultural value of Kaua`i’s lands without providing affordable housing in effective and efficient ways.

But things apparently have changed, like both JoAnn and Jay are anticipating a tougher re-election fight than usual, having pissed off folks on both sides of the aisle due to their actions on Bill 2491, the pesticide/GMO regulatory law.

As an indication of who really benefits, consider this post on the Hawaii Life real estate blog back in 2009, when the ordinance was set to expire:

So what we have are a number of Ag-zoned CPR lots (a type of land subdivision based on Hawaii’s condominium laws) on the market right now that will lose the ability to have a home built on them, unless: a) they sell fairly quickly and the new owner starts the permitting process; or b) the current owner goes ahead and pulls a permit for a house they would rather not have to build.”

If you’ve ever considered buying and building on Kauai…this ‘ADU Sunset’ has created an unprecedented opportunity.

But not nearly so unprecedented as the opportunity to really mine gold by doing away with the expiration date altogether, forever.

In closing, I received two striking images this weekend. The first is of Kauai, as taken from the International Space Station. At that distance, it's all about the island as a land mass in the middle of the sea. I love her profile. 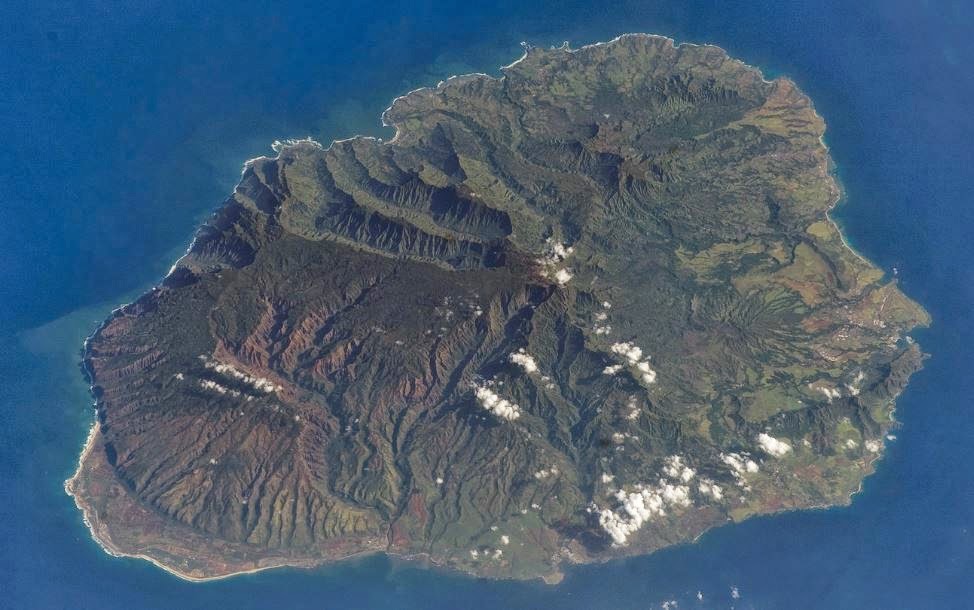 The second, taken from a drone, shows the neighborhood in Wainiha that was the focus of the Abuse Chronicles series. 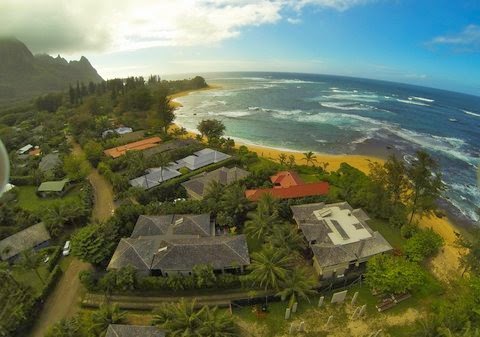 It graphically depicts the transformation of this former residential neighborhood: the proliferation of de facto mini-resorts without virtue of a special management area permit. Just check out the size of those TVR houses, especially compared to the residences on the mauka side of the street.

This is what happens when the county fails to engage in sound land use planning and enforcement. It's happening again on ag lands around the county, and the situation will only worsen with an extension of the ADU law.

Will the Council finally say no, enough? Or will it roll over again and go belly up for the special interests?

Anything is possible in an election year.
Posted by Joan Conrow at 8:58 AM

The County absolutely should allow extra units on Ag lots. Perhaps an R-1 zoning (one house per acre) on all lots of record(Sub-divided lots, not CPR lots), smaller than 15 acres.
The Council could put in a building size limit.
Ag is history for smaller lots, anyway.
I have an Ag plan which consists of saving my grass clippings and composting them. This is a true agricultural product.
The problem is that after I capitalize my land, house and composting equipment versus the income needed (on a 20 year projection), I have to sell a 30 gallon sack of compost for $4000 a bag. I really don't have any buyers yet. Waiting for the "Buy Local" people to swarm to my compost farm.

I thought Jay said this was his last term! When did that change? As for Joann, she's become one of those politicians that care more about re-election than taking unpopular stands based on conviction. She's been in it too long. Time for new blood and I don't mean the next generation of gob's.

About 375 properties are on the list. Many on the list own more than one property, are owned by developers or a county "insider"

Look at the 375 properties and see who really benefits from this.

This is an "elite" class and we need to ask why?

Joan... if you get the list of owners who will benefit from this will you print it in your blog?

Where does 375 properties come from?
Is that the number of properties that did not make the CPR/ADU deadline?

Joan,
Our county councilors don't have TIME to deal with this kind of manini stuff. They are too busy being fabulously famous...and leading chants at the legislature. All of this sewage, garbage, policing, zoning and planning stuff is BORING! And, the "exemption" really does need to be made permanent. With the seed companies tying up the county in court, it will be a generation before they can start carving up the south and west sides of the island into vacation rental nirvana.

No one has pointed out the fact that NO ONE gets an ADU unless they obtained a completed "Clearance" form by June, 2007. There will be no more ADDITIONAL ADUS - removing the deadline simply gives those who have a clearance form additional time to build

Regarding the image taken from a drone of Alealea Rd in Wainiha, I would like to point out that regarding the Makai side of the road, if you "check out the size of the TVR'S" in the "mini resort" THERE IS A TOTAL OF ONE.(YES ONE) And just to be clear, that house has been a tvr since the 1990's. All other houses in the immediate foreground are NOT TVR's. You may object to their size, but it is helpful to do your homework before making false characterizations about their status. A matter of journalist integrity is at stake.

No, there are 4 TVRs shown in that picture, which most certainly does depict a part of the "neighborhood" discussed in Abuse Chronicles. It's easy for an Anonymous to attack my journalistic creds but I most definitely do my homework and you should also do yours.