Musings: From the Farm Belt

The past few days have found me in the Midwest — Springfield, Ill., to be specific, land of Lincoln. It's the place where my best friend lives in a 175-year-old brick farmhouse, once a stop on the underground railroad, surrounded by hundreds of acres that her family has farmed for generations. 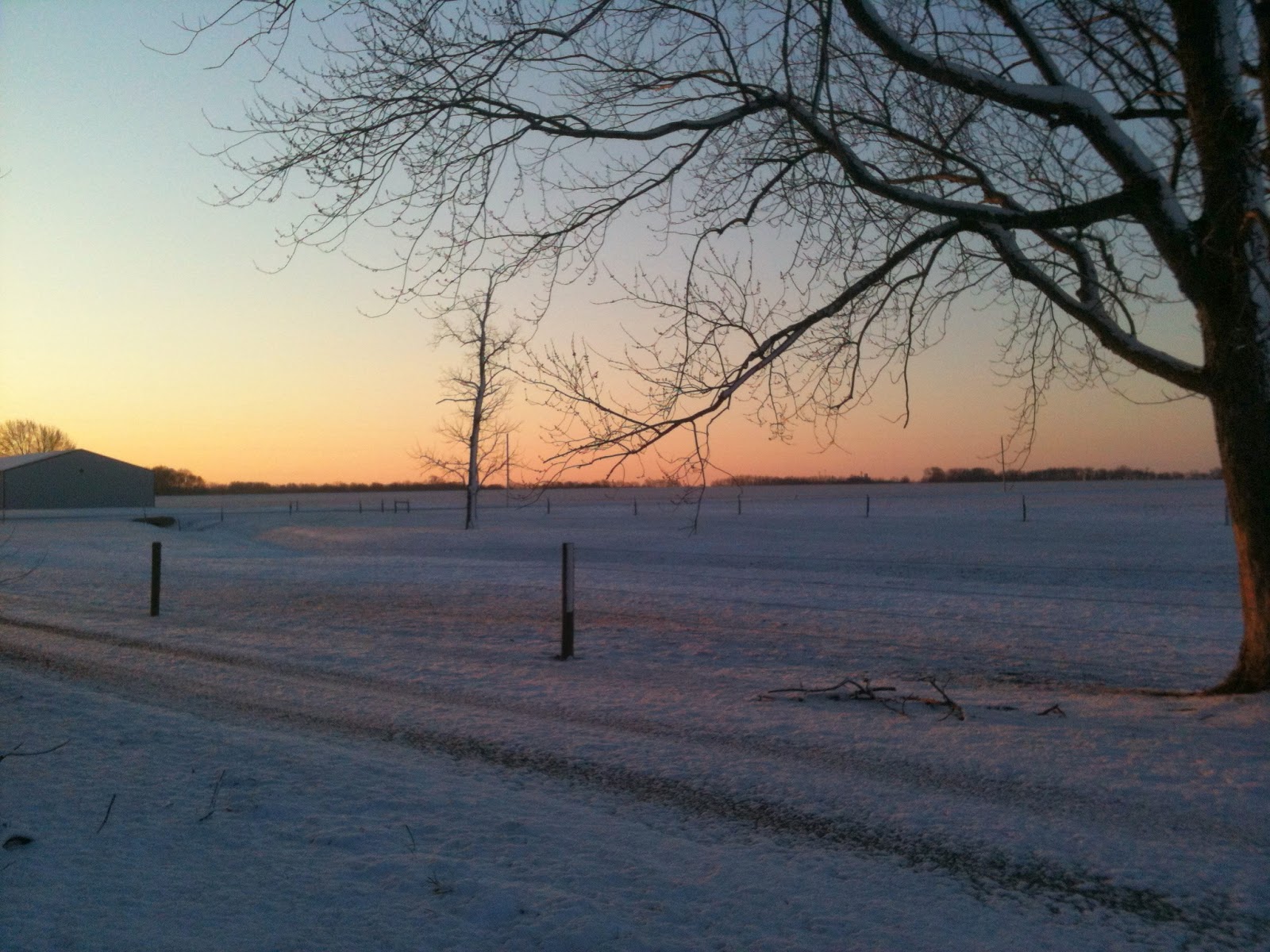 With its flat, wide open spaces, its snow, morning frost and biting winds, it's about as different from Kauai as a place could be. But it's closely related, because many farmers here plant the seeds that were grown on the westside of our island. Yes, despite what you may have heard, the chem companies do indeed ship hundreds of pounds seeds from Kauai — seeds that are then sown in the deep, black loamy soil of midwest fields just now awakening from winter.

Ironically, it is that seed export, all done by air, that helps subsidize our airfreight costs, giving planes that arrive in Hawaii laden with the goods we import something to carry on the return flight to the mainland.

She picked me up at the St. Louis airport, and once we crossed the mighty Mississippi we were in what some have termed a giant garden — the fertile prairie soil fed by countless streams and rivers that grows much of the food consumed in this country.

Yet it is also, as my friend called it, “a commodities wasteland” — the land impacted by industrial agriculture that relies on intensive mechanization, chemical fertilizers and pesticides to meet the relentless consumer demand for cheap abundant food.

We've talked a lot about how to turn that juggernaut around now that farmers have invested in expensive equipment, become set in their ways of doing things, had some of their options narrowed by the consolidation of seed companies, constantly rising costs. It won't be easy, we agreed, and ultimately, it will be driven primarily by economics and its constant companion, politics.

Still, some changes are already under way.

Farmers that have more capital are experimenting with grass-fed beef, pasture rotation, different techniques for tilling the soil, organic certification, though even that, in reality of practice, isn't a panacea, either.

Meanwhile, though, the farmers are getting older, and many of their children have abandoned rural life for more comfortable jobs in the cities — livelihoods that aren't dependent on the vagaries of rain, sun, wind, drought, disease, pest infestations; jobs that don't require them to gamble everything year after year after year. 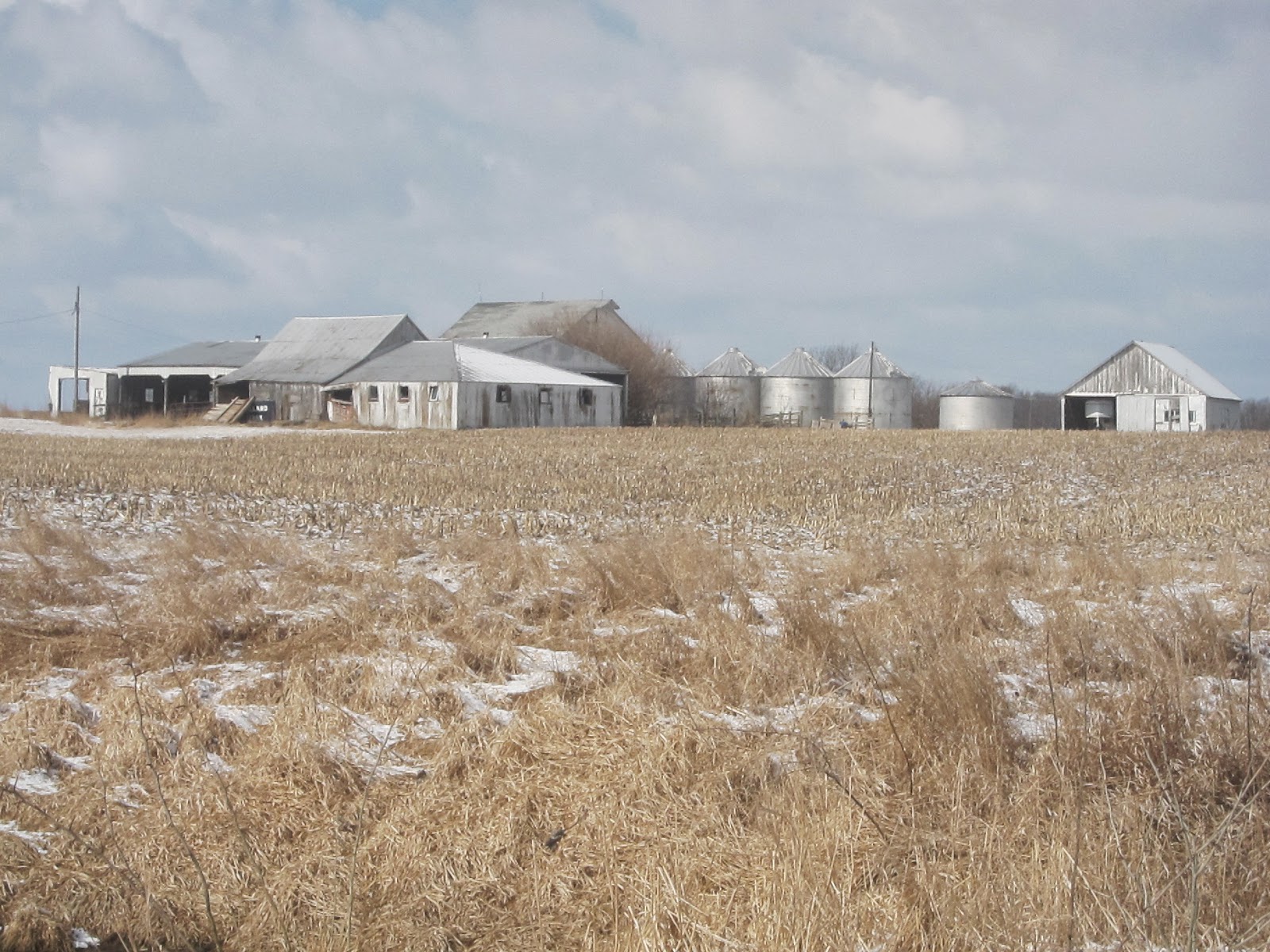 And just like on Kauai, the “gentleman farmers” — folks who want acreage for lawns, but don't want to look at cows, horses, barns, crops — are encroaching into the farmlands, building ugly McMansions on hillsides and in former corn and soybean fields. 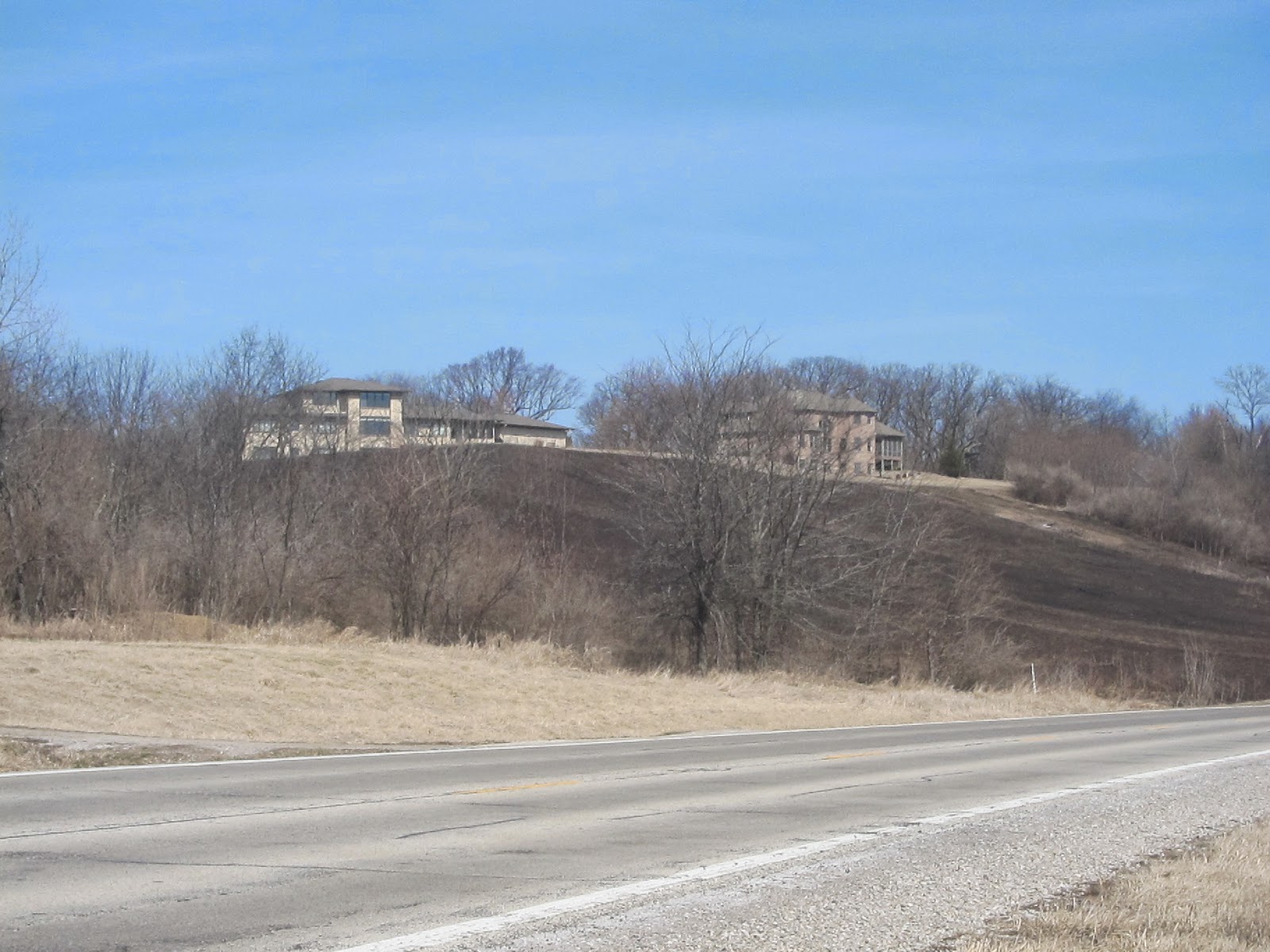 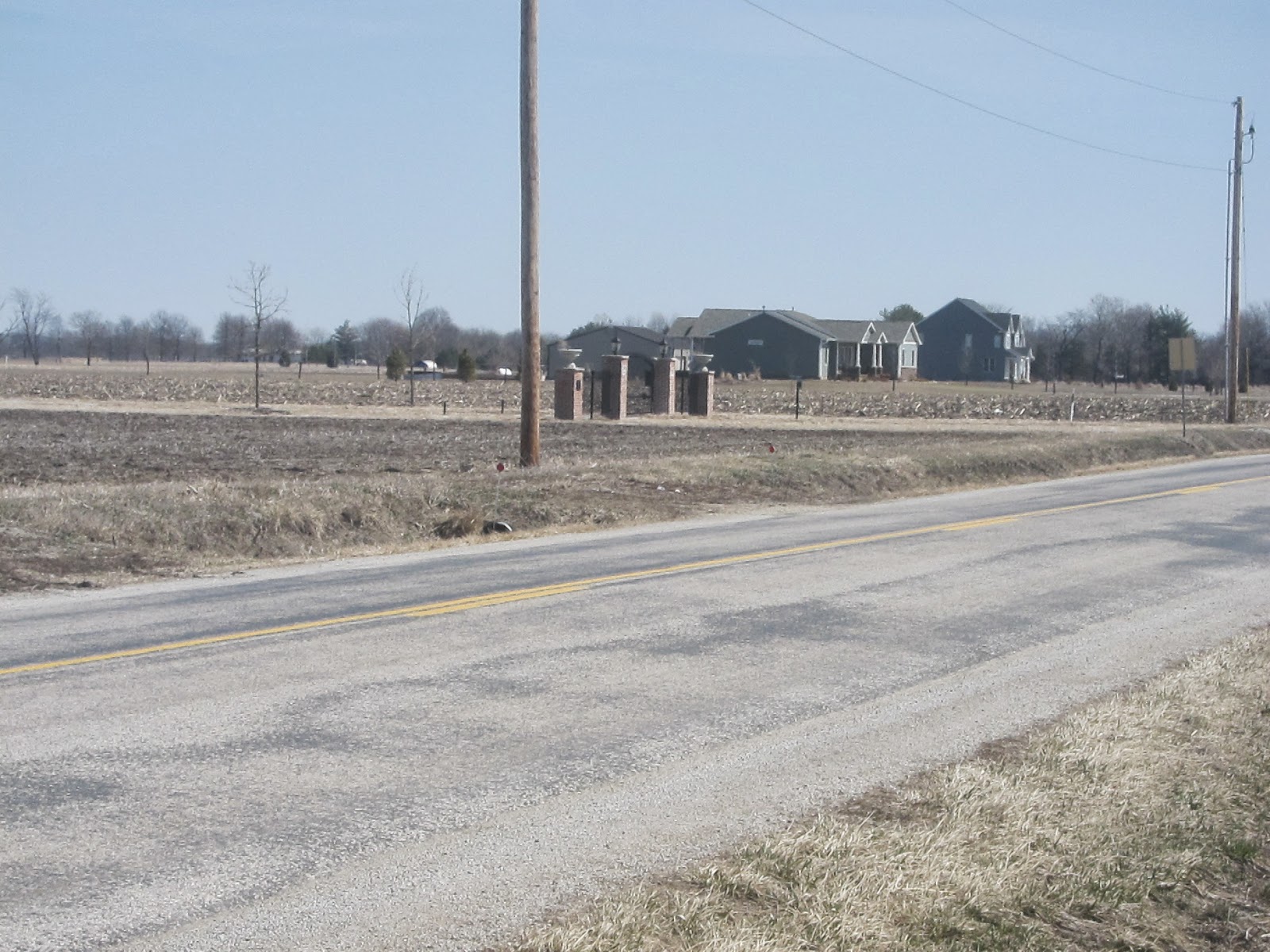 Many of these estates look out upon the remnants of a rural life that they are helping to imperil — with the cooperation of farm families that are selling off their land because the kids see more value in growing fancy houses than food. 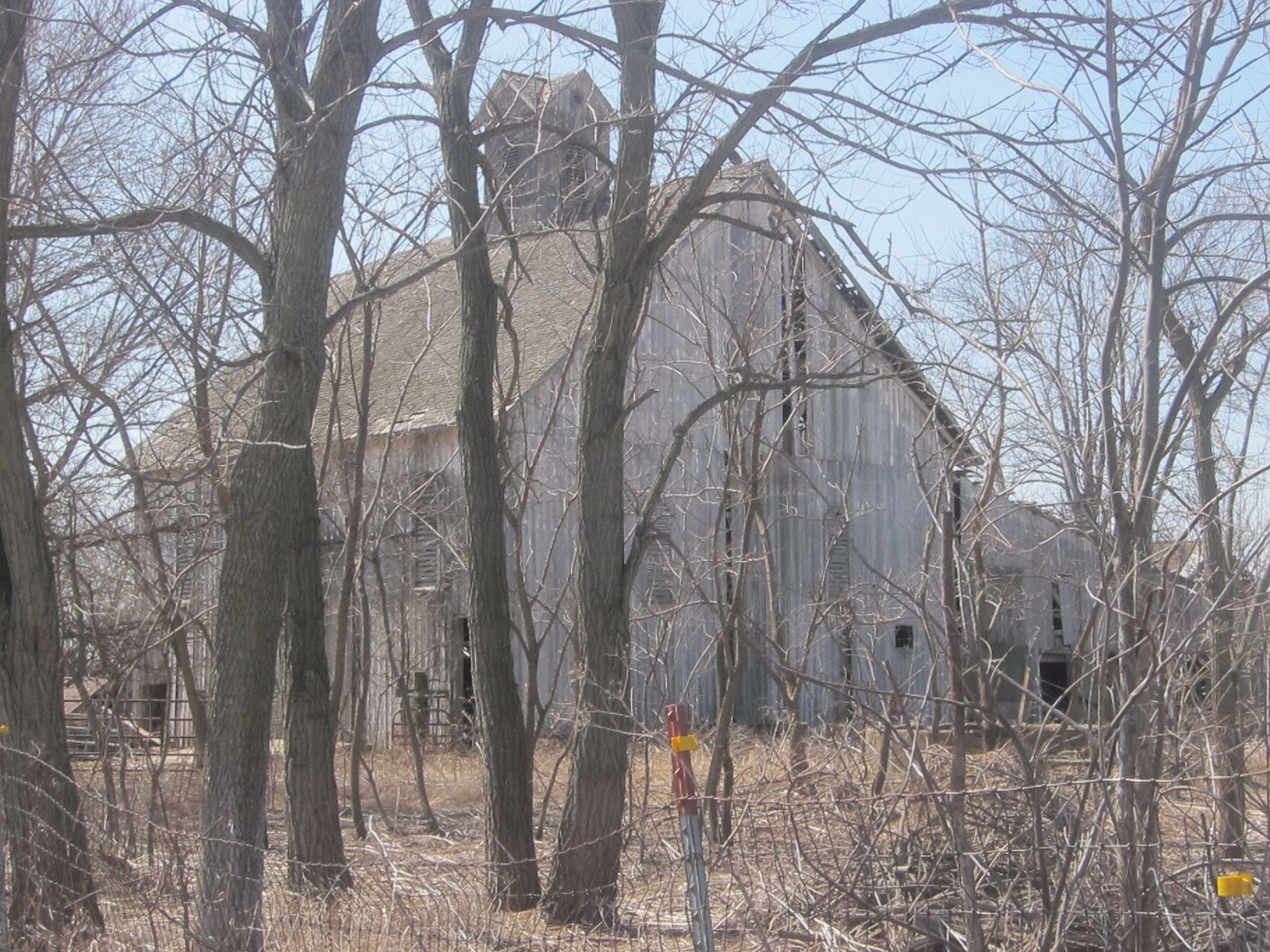 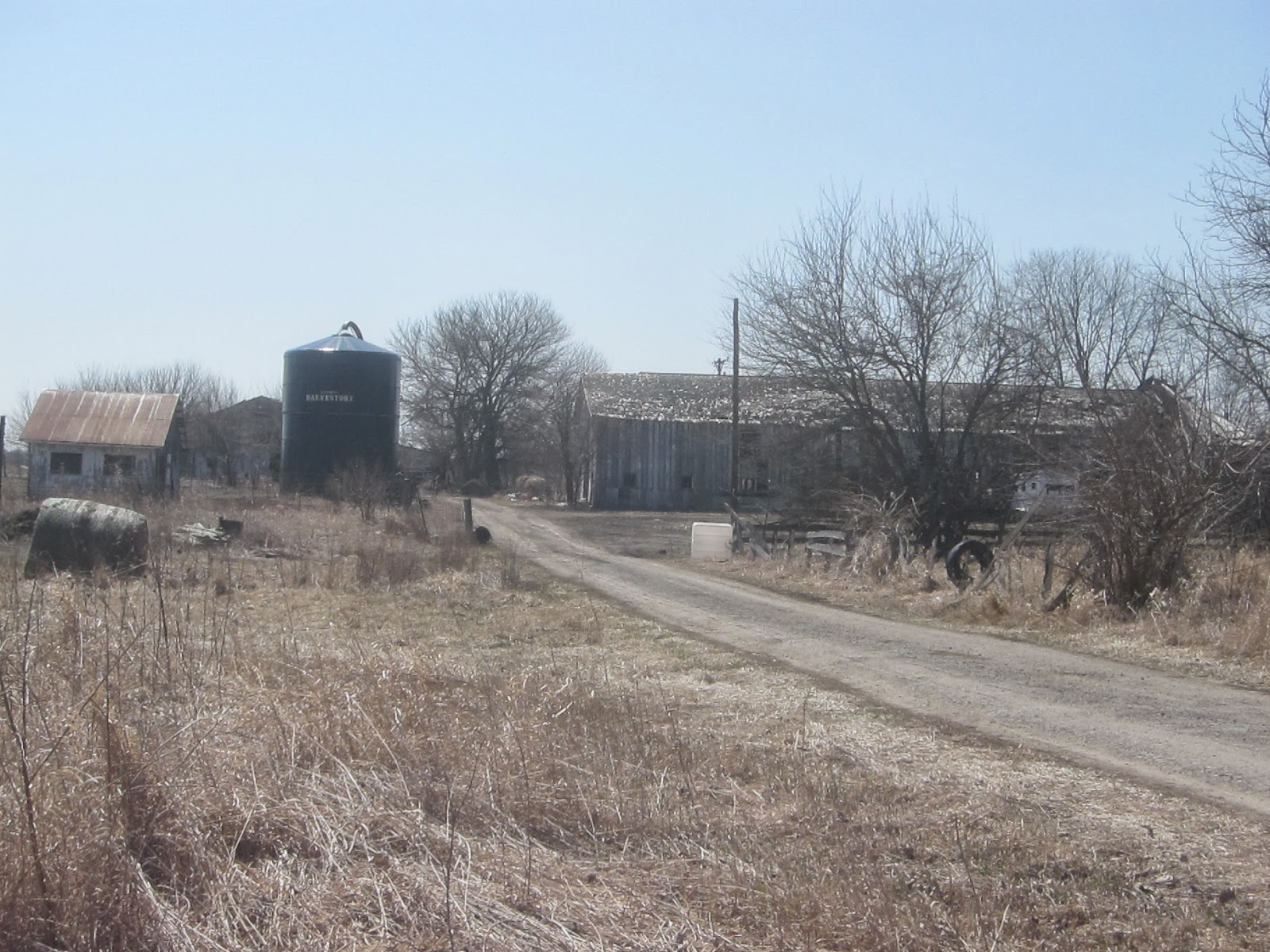 For the first time, gates are being erected that have no purpose other than to distinguish the owners as people who have no intention of mingling with their neighbors, being part of the community. 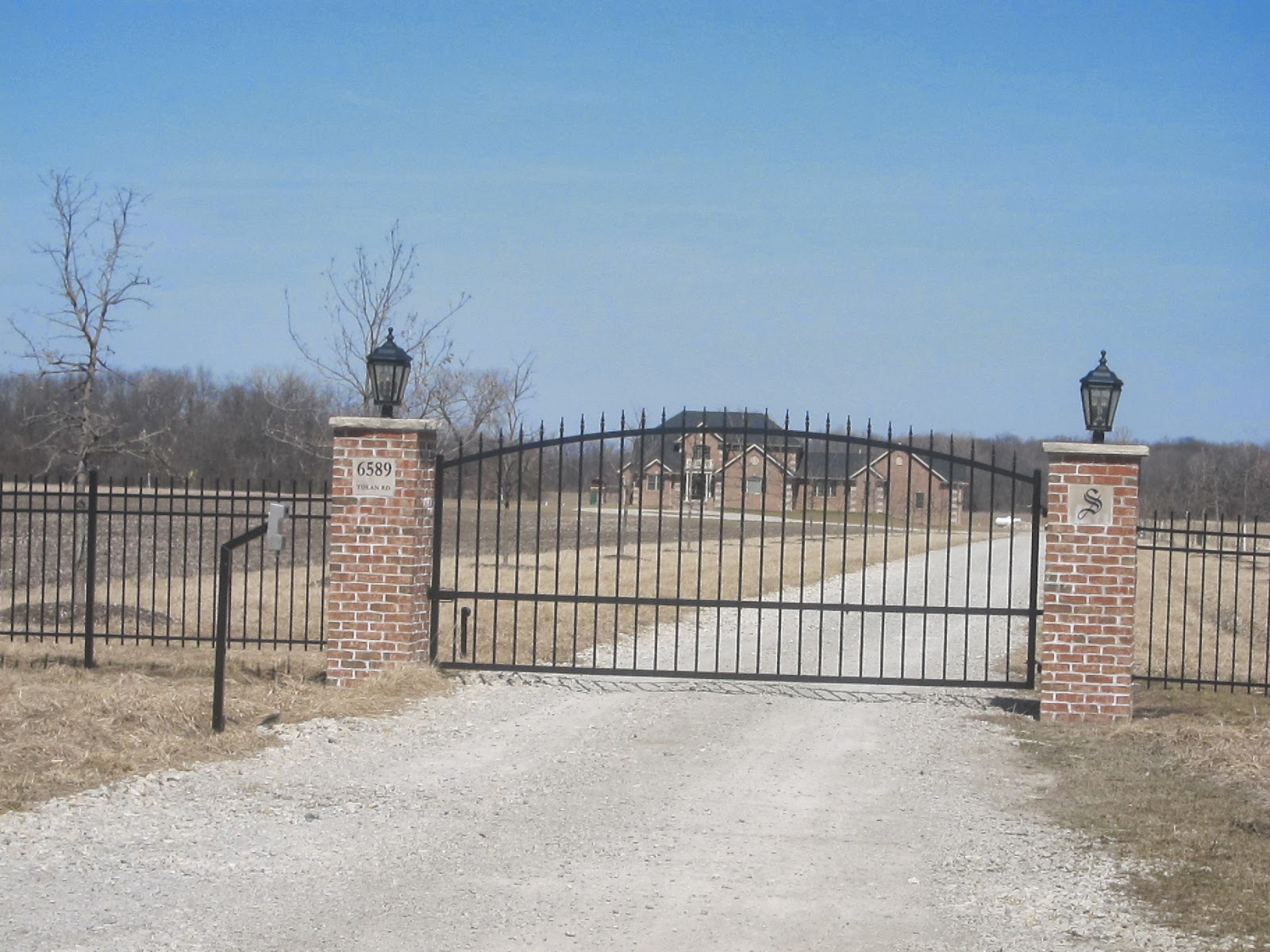 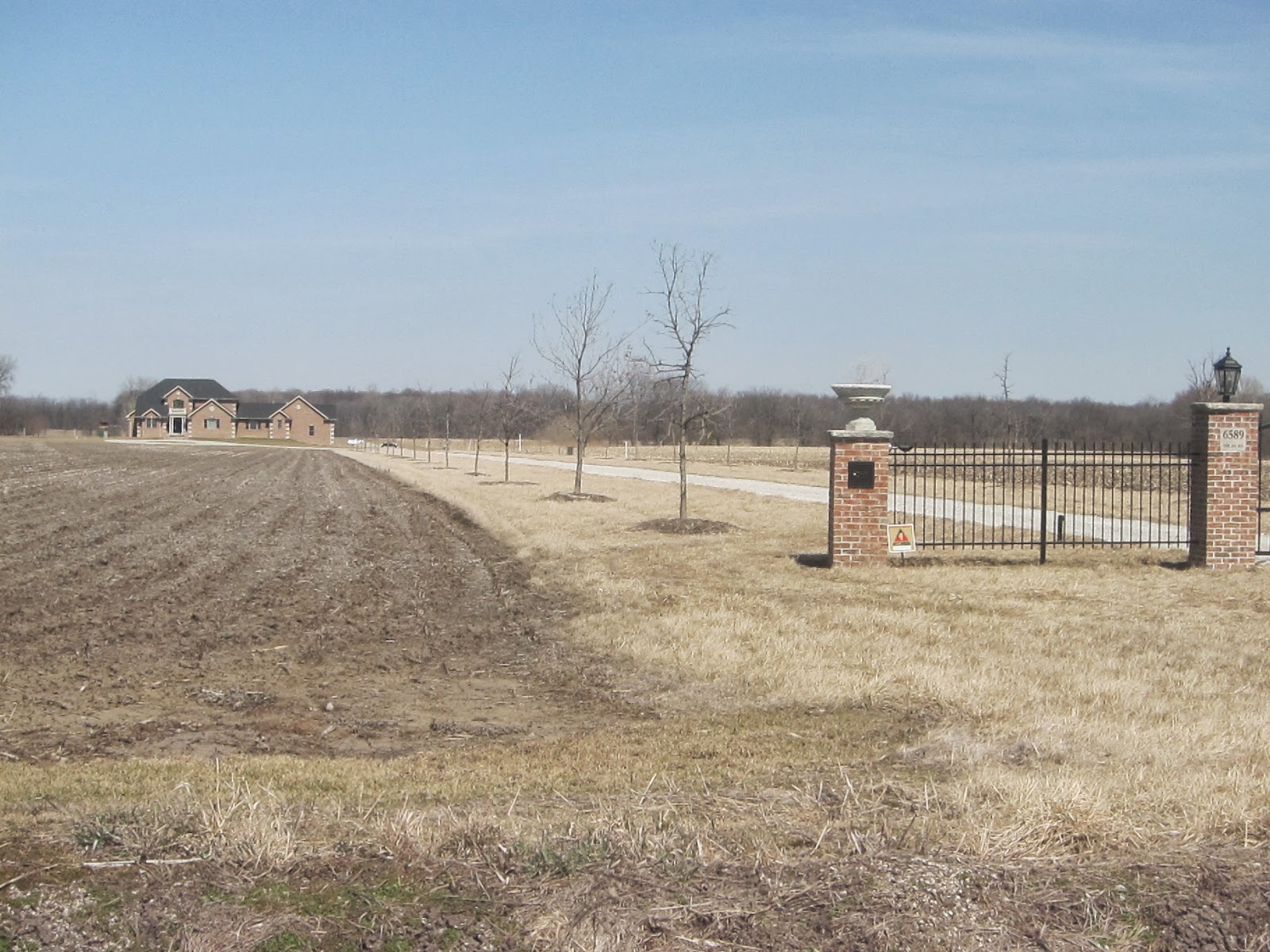 As we drove and walked through this landscape, I had the overriding sense that we are at a crossroads, and nothing less than our food supply is at stake.

We saw evidence of the ingenuity, frugality, tenaciousness and sheer pluckiness that characterized the people who settled these vast prairies, digging wells by hand, hewing trees with axes, making bricks for homes that still stand, raising every speck of their own food, supplying all their own needs. 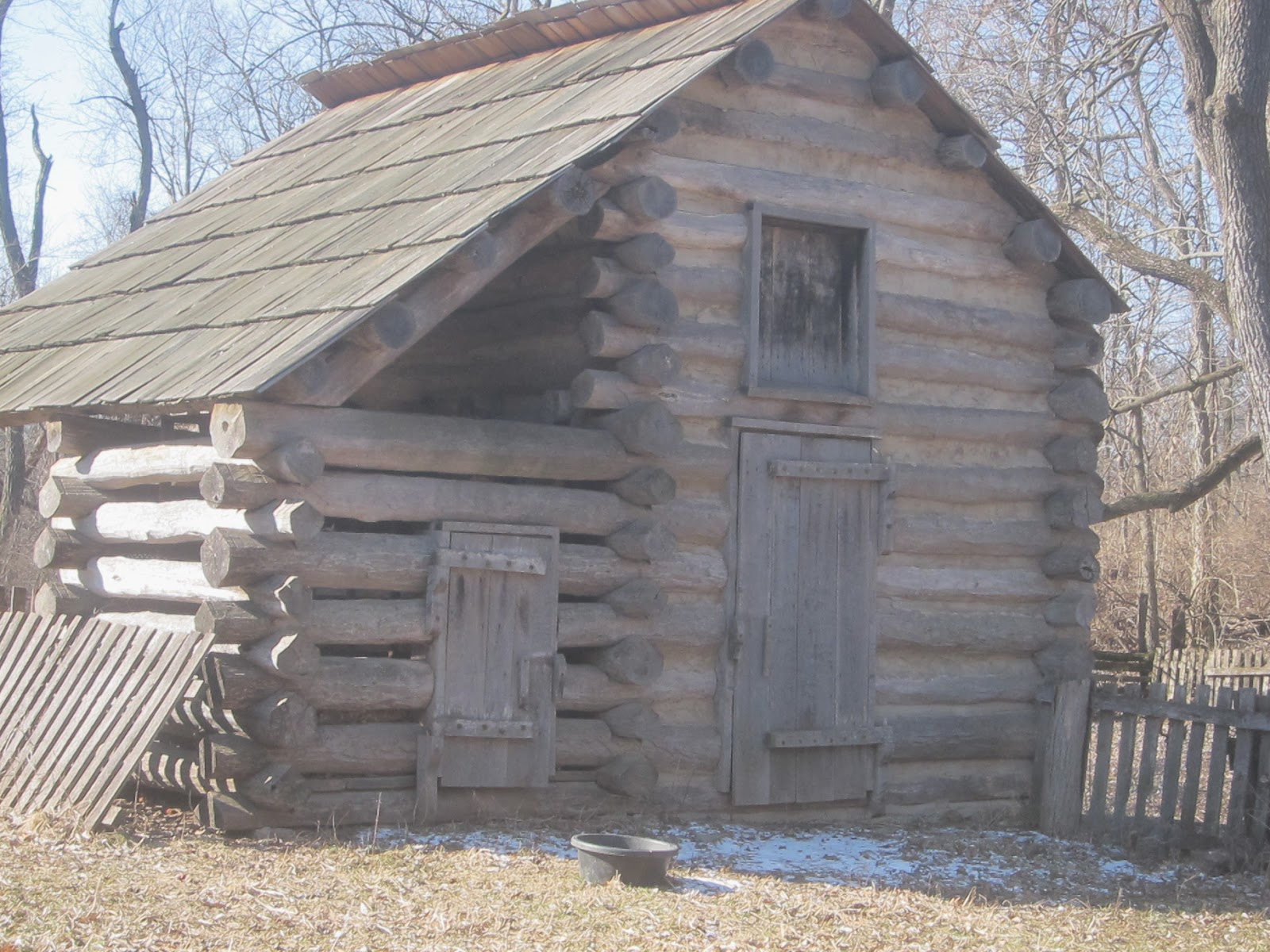 But how many among us today possess even the most basic survival skills? My friend has seen the vast gardens of her parent's youth, the baking, the handicrafts, the home-cooking, largely disappear. Everything can be lost in just one generation.

My friend, who returned to her family lands a decade ago after being away for two decades, including a stint on Kauai, where we met, has faith in the ability of wildlife to adapt, the land's ability to recover — given a chance, a bit of a boost from the humans who exploit it.

Will that happen? Or will we just keep pushing, until it collapses under our weight, our greed, our short-sighted quest for quick profits over longterm sustainability, our demand for the cheapest possible food and at the core of it, our quest for more, always and ever more, more, more?

Looking at these vast farmlands, talking with my friend, I understood the incredible complexity of the agricultural issue. Try as we might on Kauai to simplify it down to pro- or anti-GMO, there are no easy answers. And despite the self-righteousness that has accompanied the debate, there are none among us who are not complicit, at some level, in what's going down.

As with everything on this planet, we're all in this together.
Posted by Joan Conrow at 10:38 AM

Education is the key! Agriculture was deleted from the curriculum in public schools decades ago. Is it any wonder the number of farmers was suddenly reduced? Today it is replaced by propaganda of how the big 5 will feed the world instead of a true understanding of how to feed yourself. Home economics would also be useful. They should revive that too. Young people need practical knowledge as well as technical.

As our planet gets more and more crowded, especially in the nice places like Kauai, land tends to become more and more valuable so that the farmer no longer can produce enough income not only to support his/her family but to accumulate sufficient savings to pay the inevitable estate taxes. This is a real problem for preserving larger family-owned ag properties from other more lucrative uses like development. Sadly, our taxing agencies have not sufficiently addressed this problem so that the long term outlook for larger family farms are in jeopardy. The IRS will give additional time to pay the taxes but no value discounts for maintaining the land in farming. It is taxes at its highest and best use which is often not agriculture.

I love the the differences, yet, similarities; the contradictions and hypocrisies; and the realities.

Your friend sounds like Anna. If so, wishing her--both of you--well!

and locally, thank you Wainiha TVR owners for this. "Premiums are going up on nearly 14,000 federally subsidized flood insurance policies in Hawaii as Congress looks to get a federal program out of a $24 billion hole. "

Thanks for the well-wishes anonymous 4:36pm!

Lest we forget the ag subsidies that are supporting farmers for their production. If they were farming only on the price of the commodity we would be back in the conditions that moved Willie Nelson to perform fundraisers for farmers. The landscape would look totally different in the farm belt. The video King Corn covered the issue. GMO increased production from 40 to 140 bushels an acre and the subsidy was paid regardless of the price of corn.

The only subsidy for farmers from the Feds on Kauai was removed for sugar and that caused the demise of the sugar plantations on Kauai.

Money drives everything in America. I gave a sigh of relief for the Robinson family when i saw the level of investment that the seed companies were putting in Robinson land.

Removal of the subsidy for corn and soybeans would drastically change the view of the farm belt like it changed the landscape of Kauai.

I like the photo of the gated community of one.

Joan,
I think you are romanticizing a time that wasn't necessarily that golden. Many of those hardy settlers you extol had fled famines in Europe. The Dust Bowl was not that long ago. I also don't see why agriculture and farmers in particular should be vilified for modernizing. We expect our government agencies to be on the internet and not using quills and parchment. Why shouldn't farmers be investing in high-tech machinery and other technologies? And, it isn't a zero sum game. Better pest and soil management do not exclude embracing genetically engineered traits or computer driven and GPS enabled planters. That said, I actually enjoyed this post and chuckled at the picture of the decorative gate. As you point out, a similarity between Illinois and Hawaii is the unchecked conversion (loss) of open space (such as farm fields) to gentleman estates and sprawl. America has poor land use and planning policies and I think that this is THE issue. But, protesting GMOs and whipping up hysteria about pesticides is not an effective way to deal with it.

I realize that this is totally off-topic, but did you see Dylan Hooser's letter to TGI on Wednesday, March 26? I am still laughing.

Under the heading of:

No fishing bans without research, first

"...I feel that, first and foremost, the decisions...around Kauai should be based on sound research and supported with broadbased community input".

um, exactly. To be fair, i did edit this quote to remove the qualifications in the letter that make clear this sentiment only applies to attempts to regulate fishing.

Thank you for another good article about farms & the many complexities facing today's farmer. Meanwhile...here in Kauai, we have wealthy developers, in collusion with our planning dept and commission, continuing to blatantly change our simple interpretation of what farming is: growing/raising/producing FOOD and
products on AG land. Common Ground Restaurant, which purchases its ingredients from outside sources,(no different from many other restaurants which do not claim any farm-to-table label)is currently applying for a liquor and live entertainment/dancing license.
Common Ground is for sale for $10 million (how's that for profit?)Imagine that! This certainly opens up one's understanding of what it takes to be a farmer on Kauai. The sky's the limit here, anything but using AG land for agriculture. I like your term "mcmansions" by the way.
This is all hogwash but that would be insulting honest hogs.
The hearing before the Liquor commission is scheduled @ 4pm on Thursday, April 3rd. Just in case, you know, folks have an opinion or , "feelings" about the issue.

To 11:04 pm: I am not opposed to farmers using "high-tech machinery and other technologies."

And 8:15, thanks for the heads up on Common Ground's request for liquor and live entertainment license, an oh-so-appropriate use of ag land. As the adage goes, give 'em an inch and they'll take a mile…..