It's a new moon in Aries, a great time for setting intentions for the year ahead, and as the Cosmic Path website advises:

The Universe is asking us to release everything we don’t need; Weed out relationships that hold us back or cut us down and surround ourselves with people who support our evolution.

So I went right in to Facebook and unfriended a few “nevah was friends,” starting with Andy Parx, who left a stinking pile of doo doo in comments yesterday.

I recall, after the passage of Bill 2491, a few Facebookers lauding toxic Andy and his “reporting” — a steady regurgitation of propaganda — as the “hero of the anti-GMO movement.” And I thought that — and the emergence of Biotech Babe Nomi Carmoma as spokeswoman — tells you pretty much all you need to know about the low vibration of that movement.

Speaking of vibration, here's a profile that Nomi —self-annointed “kahuna” from So Cal — posted about herself:

I am all about lifting the vibration of humanity that we might set rising that of the planet and restore the reflective, sensitive rainbow electromagnetic shield around Earth. I'm in security, bioelectric security to be specific, and most of our Earthly problems are the results of massive security breaches because our egos spiked our vibrations low and our shield reflects our planets vibration.

Ironically, I would actually view Nomi quite a bit more fondly if I thought for one minute that any of that was true. But she, like Dylan and Dad Hooser, are posers of the worst kind, because they are doing harm — whether intentionally, or unconsciously — while pretending to be good and do good. That's why I expose them, and it has nothing to do with grudges or personality clashes. I know it's hard for the hoodwinked to accept the truth, but please don't expect me to indulge your delusions.

I bring them up today only because they are gathering on Maui for a march — followed by free food and music — where they are trying to get signatures for a yet another poorly-crafted ordinance calling for a temporary moratorium on GMO activities, pending an EIS.

All the usuals will be there: Walter Ritte, Makana, Dustin Barca (who apparently never read our bill, because he erroneously believes it includes an EIS), Gary Hooser…. 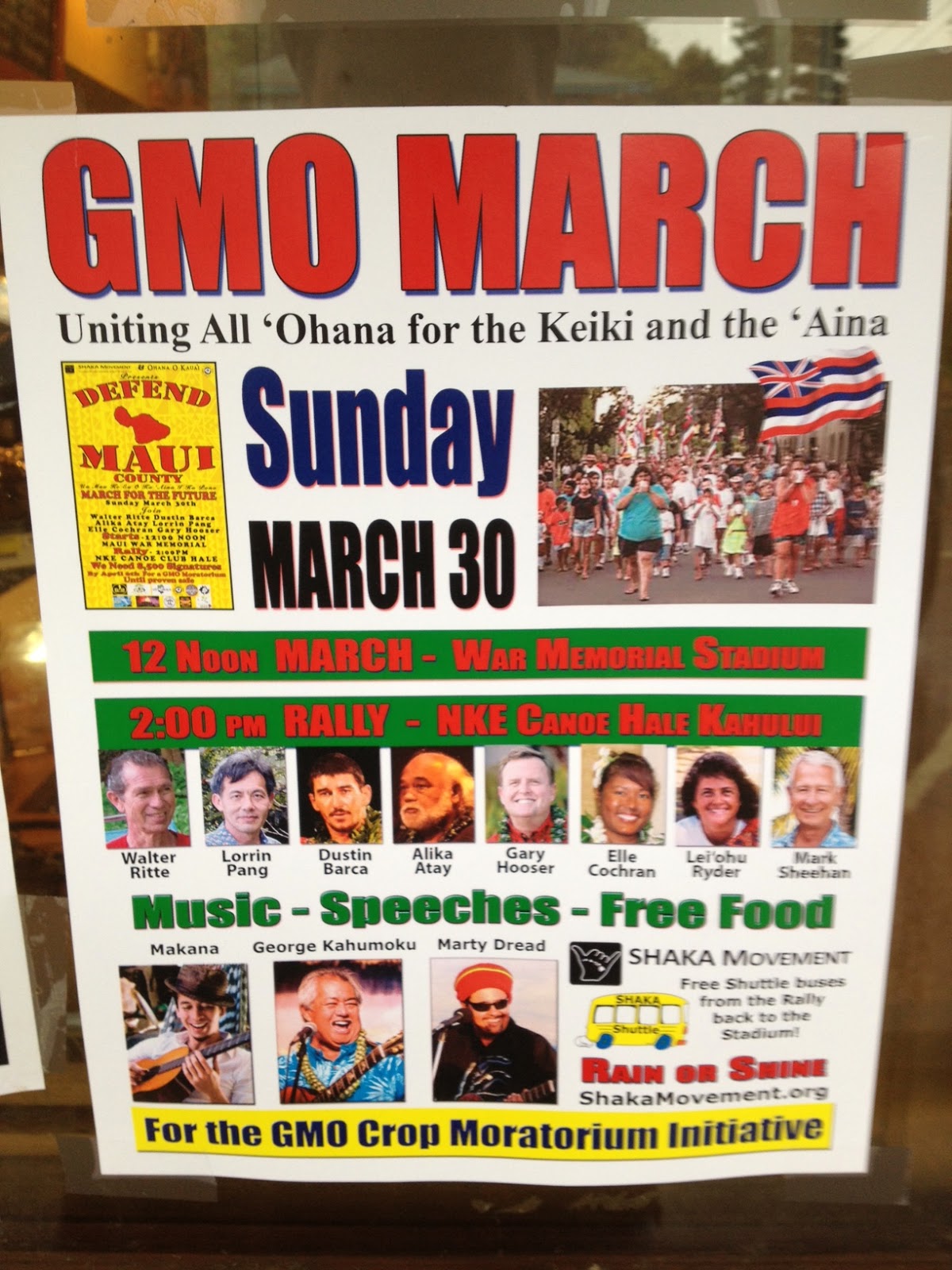 Except on Maui, they don't even try to pretend, as they did on Kauai, that high end realtors aren't a key force in this supposed land-protection movement. They've got ritzy Wailea Realtor Mark Sheehan right on the program, where he can promote his commission-driven credo:

My clients want to avoid drift from cane burning, pesticides and GMO farms!

OK. Thanks for making it so clear what this is really and truly all about.


Looking at the faces on the program, I thought back to how Walter used to fight tourism, developers and fat cat realtors on Molokai. And now he's arm-in-arm.

As the saying goes, politics — and shared economic interests — make for strange bedfellows. Which is why I prefer to sleep with my decidedly apolitical poi dogs, Koko and Paele.
Posted by Joan Conrow at 9:02 AM

Methinks that if a new person emerges in politics, and gives an honest "warts and all" disclosure about themselves, the voters will forgive.There are no clean hands.
It takes a committed person or an egotistical sociopath to face the unrelenting criticism and character schmears as soon as they put their name in the ring.
Of course, old political hogs have lived with public criticism for so long that they are immune. This immunization seems to have inoculated Hoos, the younger. He has seen that massaging the rules and laws, lies, exaggeration and kissing the ring of the wealthy is a ticket to office.
Take a look at the current council.
You have 2 complete baldaface liars, 1 confused pretty star gazer, 1 Big Chief who can't figure out if he is a Local and is looking for a higher pay State/County job to pad his retirement, 1 newbie who obviously looks to the Hoos for signals that he is doin' it right, and then the 2 local kids who really care about potholes, schools, parks, public safety, balanced budget, old folks and opportunities for the youth. Welp- I guess 2 stars in a galaxy of flip-flops, liars, confused and ambitious is a pretty good start.

thanks for saying it like it is so often.They all seem to have an endless travel budget, and the organizers have learned well, offer free food and music and a crowd is sure to come.I do support Organic agriculture and sustainability, but flying around the islands is not sustainable. It's all about land use.

Aue Joan. On the Black Moon New Moon in Aries, you make room for space and fresh air. Like few others dare to tell; I discover the arm in arm connections that make Monsanto et. al toxic, invasive and seductive. Not you Walter you know about the small print and the kaona of hidden meanings; and George on guitar! Oh No. The astrology is clear for setting intentions: clear first, then plant.

Thanks for keeping us kanaka across the ocean informed. Mokihana

The bill and movement's flaws don't change the fact that the seed/chemical companies are part scientific experiment and part ag. Why should they be able to do that next to schools, homes, streams, rivers and the ocean and without a study to disclose the health and environmental impacts? Yeah, hotels and golf courses use a ton of pesticides but they at least had to do an EIS before they proceeded. Kind of bassackward. And it should have been more than "we follow the label so there's nothing to worry about". But if they're not ruining health or the environment, let them farm.

Walter is still very much at the forefront of tourism issues impacting Moloka'i. He believes, rightly so, that the most important issue facing Moloka'i today is the detrimental impacts that Monsanto (the biggest employer there) is having on the natural resources of that small island. An island that is majority kanaka and who depend on the land and sea for subsistence.

Aloha 'aina encompasses the big picture, not solely GMOS. It just happens to be a pressing issue for the tiny island of Moloka'i. I appreciate the work Walter does at the legislature. A labeling bill hasn't passed but the momentum is shifting in the right direction. The movement has built awareness and it is only a matter of time before legislation will follow as consumers demand it.

You're great at pointing out the negatives...I'd like to see some alternatives or solutions. Its not about the leaders of any movement, its about what is right for the 'aina and the people who depend on it. The only way I get pass the political bullshit, is to make my personal lifestyle choices align with my values of aloha, malama and 'ohana. Its the only real change I can affect. Trying to affect change politically has proven long, difficult, frustrating and virtually useless.

1113
Molokai is 88 percent government entitlements.
If you want to see change, stop food stamps, section 8, welfare and every other gov program that pays people to not work....Molokai antis control water, zoning and almost all economic activity. Not a model for inspiration.

I can't believe it. I agree with everything you said. A case in point is the dairy farm. This land was in ag my entire life. First cane, then pasture (hmmmmm), then mixed use. When i was growing up we had 2 large dairies. One right in a town, the other nearby. There were also independent dairy herds all over the place. Now it is evil?
This is a sham. There are some people who would prefer another Poipu Kai at Mahalepu. I want a dairy.
These Nut cases are the cannon fodder of the would-be developers.

Yes, Joan! As the Arab saying goes, "The enemy of my enemy is my friend."

There is so much important news to cover for promoting freedoms against huge corporate agendas that I am wondering why you are busy stooping down to tabloid trash levels? Bottom line is that I am very happy that high-end real estate marketers are anti- GMO. If you were gifted a million dollars, and wanted to buy property in Hawaii, wouldn't you want to promote life-preserving and land-enhancing practices, and all the better if it was a win-win. When business can be strong enough to match the power of corporate dollars that are destroying our planet and especially these precious islands, well hooray! Never mind if people are exhibiting human behavior, at least it has positive repercussions. Focus on the positive end results too!!

There's nothing "win-win" about turning ag land into upscale gentleman's estates, and it will not be a positive result for anyone but the realtors and land speculators.

For you to support such an unholy alliance indicates you're either in bed with the realtors or hopelessly deluded about the reality of land use in Hawaii.

Or maybe you just support the idea of increasing gentrification and pushing out local people and making it ever harder for kanaka to control their land. Because that is where your foolishness is headed.