Musings: Thoughts on This and That

Got an email from the “Babes” calling for “all hands on deck” this Friday at Hilo Circuit Court, where a hearing is set on a request for an injunction against the new Hawaii Island GMO ban.

And I thought, yeah, judges are always swayed by a rally outside the courthouse. Be sure to wear your matching shirts.

The complaint for declaratory relief was filed by Margery Bronster on behalf of “John Doe,” an unnamed papaya farmer. (She's also one of the attorneys suing Kauai County over our new GMO/pesticide regulatory law.) Though Big Island farmers aren't banned from growing papayas genetically engineered to resist the ringspot virus, they must register their crops and provide other proprietary production info by today, or face a $1,000 daily fine. The reports would be publicly disclosed.

The complaint alleges the registration/disclosure is “burdensome and intrusive,” conflicts with state and federal law and exposes the farmer to “irreparable harm from vandalism, intimidation, and misappropriation of his trade secrets.” It claims “John Doe” already has been “the victim of intimidation and threatening behavior by anti-GE crop activists” and details the “extremism and criminality” of activists in Hawaii County, where thousands of GE papaya trees were destroyed in Kapoho.

The complaint seeks to invalidate the law's registration provision, while another motion requests a temporary restraining order and preliminary injunction staying the March 5 registration deadline.

Heard defeated Prosecutor Shaylene Iseri on TV vowing to file a complaint with the Office of Information Practices because the county attorney was allegedly withholding information.

And I thought back on how she had repeatedly flat out refused, as prosecutor, to honor OIP directives ordering her to release public documents to me.

Then I read a “fuel-gate” denial from Shay in Andy Parx's blog:

I never pursued charges against [former county transportation director] Janine Rapozo. The Grand Jury returned an indictment. The Grand a Jury has its own Grand Jury counsel appointed by the court. They are prohibited from consulting with the prosecutor or deputy.

And I thought, mmm, yeah, but it's the prosecutor who decides what goes to the grand jury. We're still getting Shay's version of "truth," as opposed to The Truth.

Got some photos of the sandbags in front of “green” Realtor Neal Norman's richy-rich house in Haena, which were exposed by the recent big surf. Some empty sandbags washed out into the ocean, and the green ties are creating a tripping hazard for beach walkers. 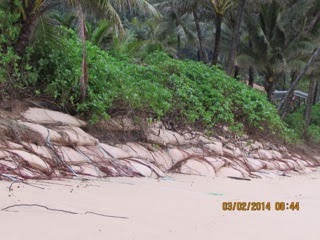 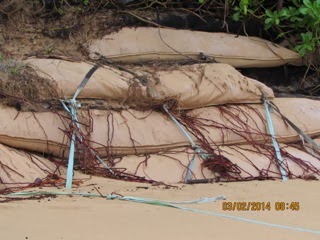 And I thought, gee, these were put in under an emergency temporary permit for one-year's use — way back in 1997.

The prevailing winds were my first concern when I heard what and where this was proposed, Don't know as it would be very pleasent [sic] out there playing Poipu Bay Golf Course when the trades are blowing.

And I thought, wow, I can remember when folks opposed that golf course because they were disturbed about taking land out of agriculture for resort uses. Now they're protesting agriculture because it might impact the golf course, which of course uses fertilizers, pesticides and water, all of which drain into the sea.

Heard folks complain about the possible future runoff from the dairy, which may be a concern.

And I thought, so where is the outcry over the shishi and doodoo that we know is going into Hanalei Bay from the all “sleeps-12-to-14” oceanfront vacation rentals still using cesspools? (Click on the map to see the legend. Dark green with cross-hatching are cesspool TVRs.) 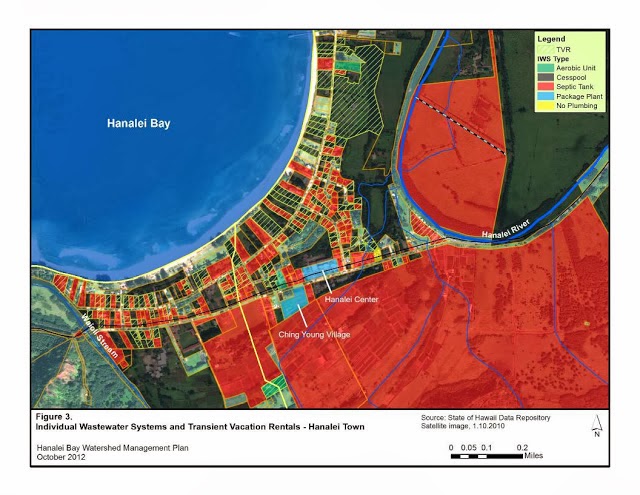 Not to mention the even more pristine waters between Wainiha and Haena. 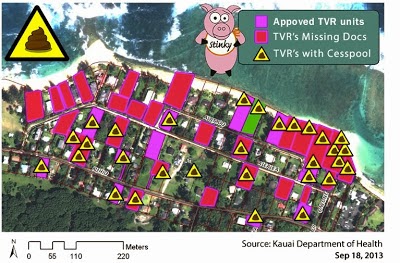 It is confusing. How did Janine get indicted if the prosecutor never pursued charges against her? Is that even possible?

No, it's not possible.

Agreed, but isn't that map of Haena (Alealea, Alamoo area) vs. Hanalei?

You're right, and thanks for bringing that to my attention. I have corrected the post and also added a map showing the septic tanks and cesspools of TVRs on Hanalei Bay.

what about all of the long term rentals and private homes in Hanalei and Haena who still have cesspools?

Agreed. We need sewer in Hanalei and Haena.

More than illegal, that sandbag wall perfectly symbolizes the self aggrandizement of the property owners on the other side. Centuries ago it was the hilltop castle that proclaimed dominion over the local peasants, now it's the obese beach house and prime view.

And people think colonialism is dead!

Leave Shay alone. How many times does she have to tell you how great she is? It's the county attorney, state judge, humane society, eeoc, federal judge, special counsel, attorney general, councilmembers, former deputy prosecutors, bloggers and other scoundrels who have conspired to make her look bad.

Enforcement is one thing. The County Attorney is not capable of properly defining what to enforce. Planning Dept. is adrift.
Of course the sandbag issue is a State deal and they will come out and check.
The "excessive barking" part of the doggie bark law is impossible to enforce.
Ooops. I think my neighbor's doggie just barked, gotta turn 'em in, I never liked him anyway. Do I call 911 bark bark line?

holy shit, that's alot of human manure going directly into the ocean, and with a jacuzzi in every bathroom those high volume resorts are polluting mightily

Clearly, Shaylene thinks we are all idiots. She also hopes we are idiots. That way she might get some votes.


As a child, i visited my grandparents who farmed taro in Waipa and loved being in Hanalei and Waikoko. This past weekend we stayed overnight in Wainiha. Waikoko looks okay, Waipa Valley has changed a lot with the Waipa foundation buildings, etc. it's not a bad thing! Wainiha has changed big time. As i walked along the beach, i came to understand the problems there and why Karen D. has been working so hard to find solutions for the coastline from Hanalei to Haena. I wonder who sold the land to all these new land owners, i wonder why the county has been so lax about enforcement and i wonder what will happen when the next tsunami hits that area like it did sometime in the 1940s. We human beings are so guilty about how we have trashed Mother Earth, some so caught up into getting more than what they need. By the way, how come the owners don't need to put in septic tanks? Those cesspools are dangerous-----i don't want to get into the water along the coastline in those areas!!!!!

Cesspools and septic tanks both percolate into the ground. With the septic leach fields percolation occurs 6 feet bellow the surface. Bacteria can easily get to the surface during flood and heavy rain conditions. And you know how often that happens in Hanalei. Cesspools in sandy areas are hard to dig because of the unstable quality of sand and also Hanalei being in a flood zone and parts being below sea level, you will probably hit water at about a six foot depth. A concrete collar with percolation vents are installed for cesspools. Just as bad. In lowland sandy areas like Hanalei town etc... You can see the water level rise and fall in a cesspool, depending if it's high tide or not.

The only solution to saving Hanalei and Hanalei Bay from extreme biological degradation is to install a sewer treatment plant for the area. ASAP!

i agree that a sewer system would be the best thing for the area! But that will take eons, so until then, those owners should be required to, at the very least, install septic tanks (not all that great, but better than cesspools.)

I agree septic systems are a little better than cesspools. The only issue would be is if the property doesn't have enough undeveloped land area. Septic systems require way more space, and you know how overcrowded Hanalei is.

so small lots get to be shitty?

i wish shaylene would just go away along with mel rapozo. she's bitter and angry that she got voted out..
she's a waste of tax payer dollars and her littl lap dog mel rapozo is so transparent and obnoxious. bynum should have gotten way more money for his troubles. it's disgusting...
go away shaylene..go away mel rapozo. you are no longer the queen in wonderland. you can scream "of with their heads" as many times as you want to..no one will do your bidding.

why are these tvr's still allowed to raid the land..they are unclicensed and in clear violation of the law are they not? then why is the planning dept and prosecutor dept not doing their duty in enforcing the law?
i thought there was going to be a special task force set up to stop these off island raiders from exploiting this land?