After reading yesterday's blog post about the confirmation of Allan Parachini to the Kauai charter commission, despite smarmy opposition by Felicia Cowden and Councilman Gary Hooser, a friend sent me an email that opined:

I dunno, I thought you were kinda easy on Felicia and Gary after one of the most appalling displays of McCarthyist public character assassination I've ever seen.

Neither of them had the spine to tell the truth about their opposition: He is a threat because he is bright and he disagrees with me on public policy issues.

Instead, the slimy innuendoes.

I suppose what's most surprising is that these two bright individuals lack the self-awareness that they were doing to Parachini what they accused him of doing. If they were held to their own standard, that would excuse both of them from playing a role in public affairs.

It's not often I'm accused of going too easy on people, though in truth, I've been trying lately to be a bit kinder and gentler, in part because Hooser supporters and anti-GMO activists are always bitching at me about questioning people's motives and intentions and writing a “polarizing and divisive blog.”

I tend to take such criticisms to heart, largely because I am a self-aware and kind person who doesn't like to hurt anyone, even when they deserve it. And the last thing this island needs is more divisiveness. Still, the totally unwarranted attack on Allan and the rhetoric constantly espoused by so many anti-GMO activists have led me to believe that their complaints are largely projection.

In other words, they are blaming me — and Allan and anyone else who questions them — for behavior they are engaging in themselves. Take this recent post by defeated mayoral candidate and anti-GMO leader Dustin Barca: 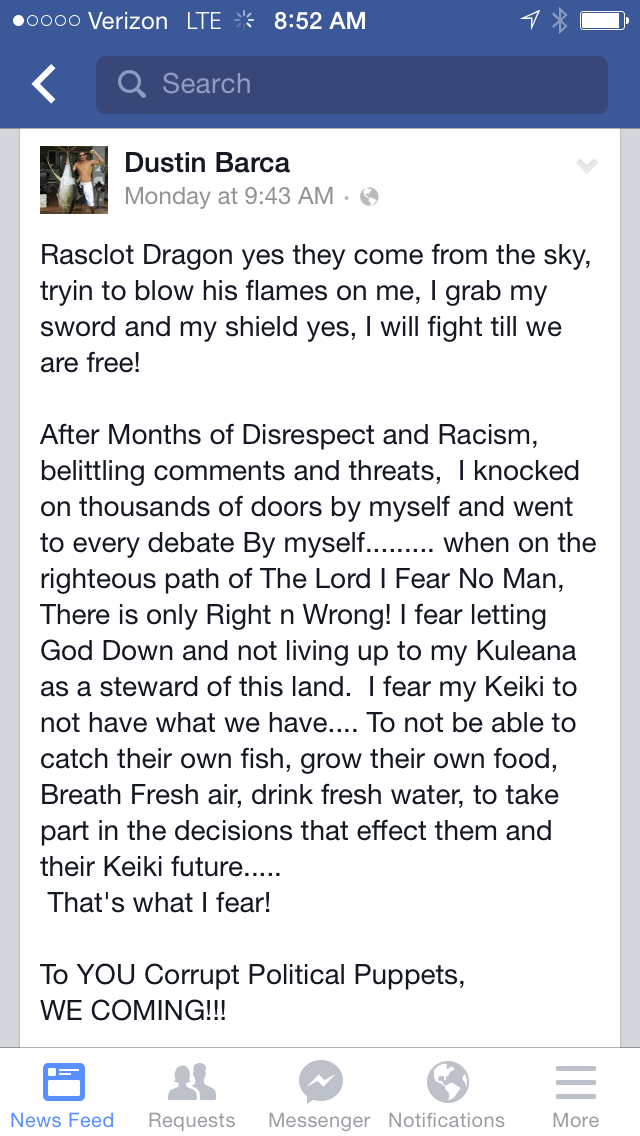 Delusional, messianic rant and persecution complex aside, what bugs me is how Dustin ends with an unsubstantiated judgment and clear threat: To YOU Corrupt Political Puppets, WE COMING!

Now how in the world is that helping to heal the island?

And it's exactly the sort of thing Gary was complaining about when he whined to Allan:

I don't see that as helpful to dialogue when we question the motivation and character of decision-makers.

Yet neither Gary nor Felicia have publicly said a word denouncing Dustin's rhetoric. Why? Because he agrees with them.

I recently had a conversation with Ashley Lukens, Hawaii director of Center for Food Safety, that ended with her taking me to task for writing unflattering — she termed them “hateful” — things about her on this blog, where they could possibly be seen by her daughter, and she didn't want that.

I asked her how she thought the Hawaii seed company employees must've felt when anti-GMO activists hacked their Facebook accounts and defaced their family portraits, turning them into ugly social media memes that linked them to Satan.

Well, I never did that, Ashley sniffed.

Maybe not, I replied. But you've maneuvered yourself into the role of spokeswoman for the movement, and you never ever spoke up against such actions, denounced them as wrong, distanced yourself from Babes Against Biotech and other groups that perpetrate such abhorrent tactics.

Though I'm often critical of Councilwoman JoAnn Yukimura, she does sometimes get it right, and one of those times was during the Council discussion on Allan's confirmation. Gary had just ragged on Allan, without any hint of irony, for “public behavior” that he deemed “disruptive and negative,” prompting JoAnn to observe, “All of us have been subjected over the past two years to being demonized with no cause.”

And then it was Councilman Mason Chock's turn to speak. “The guy comes here and wants to give back to the community and has to go through all this. I haven't found any specifics on the negatives [raised by Gary, Felicia and others.] The truth is that people are uncomfortable with him taking this position and that's uncomfortable for me.”

For this island to heal the polarization and division that has developed around the GMO/pesticide issue and most decidedly does still exist, it's going to require self-awareness, rhetoric in line with actions and allies willing to speak truth to one another. I have trusted friends who have told me, "time to put down the poison pen," and "your mean streak is showing," and I've appreciated them checking me.

Which doesn't mean we can't disagree, call people on their bullshit, laugh at people's foibles or expose wrongs, so long as we temper it with hefty doses of kindness, graciousness and diplomacy. And most importantly, make sure we've got our facts right before we go public.


I know it's a tall order, but I'm willing to try. I hope others are, too, especially those who like to leave comments on this blog. Perhaps it could be an island-wide New Year's resolution?
Posted by Joan Conrow at 10:04 AM

Hooser accused Parachini of questioning his motives? Really?! Motives can't be questioned? So when Parachini is accused of being a shill for Monsanto or a paid troll on public Facebook feeds, that isn't disparaging or questioning his motives? Those accusations come directly from Hooser's supporters yet as you state, he does nothing to distance himself from the hateful vitriol that is the lengua franca of their movement.

Questioning motives of politicians is part and parcel of the deal--not just their acts. If a politician is in the pocket of a lobbyist and passes legislation favorable to that lobbyist, aren't we duty-bound to identify it and question it? Hooser's notion of what is fair game are hypocritical indeed. Funny to hear him demand if Carvalho had called the LA Superior Court--as if THEY would disclose the terms of a confidential agreement. Yet another slur impugning Parachini's honestly.

I'm tired of the divisions here, but I seen no evidence of Hooser, Cowden, Barca et al of doing ANYTHING to promote healing and say, "We lost. We're unhappy about that, but we want to move forward and work constructively." Instead, the smear, demonize and use character assassination as a political tool.

Do we know if any of them are working on the Adler research study? Judging by the posts from the antis on news stories related to that contract, it has already been deemed a Monsanto front. There is such delusion here, someone ought to do a study on mass hysteria. Just like Salem, they are accuser, judge and jury.

I don't think you should cease and desist Joan. You speak truth to power (and would-be power) and your comments are right on. We need a clear-eyed perspective and you provide that. Thank you.

What's happened over the last two years has drawn lines of division that hurt the community. The division has only become stronger and further apart. It's constantly in your face and perpetuated by public figures like Gary and Instagram sensation Dustin Barca. but it's also perpetuated in social circles, dirty looks, etc... I appreciate your blog because you call it as it is. I don't think you should change. If you feel dirty and bad for what you write well that's another story. But so far, what ive read is right on the money and you always back up what you say. I think it's necesary. Maybe not what an ideal or perfect world would have but so necessary for the reality of this time. We should all love more and bring out the best on one another but sometimes people need a good dose of reality. I wouldn't say you have a poison pen. Maybe a punishing pen but not poison. And I think continuing to tell the real stories and the truth about issues will piss some people off but will bring healing and clarity to far more. Call it tough love!

Your pen is certainly a lot mightier (and more accurate) than Barca's mythical sword! That post is troubling and makes me wonder if he's hearing voices beyond the Fistees'.

Yes, by all means, try to be kind and turn the other cheek--that is one religious tradition.

But another, older tradition states that if you see evil and you do not confront it, you are complicit with it.

I think the stakes are too high and the continuing provocation too much to ignore.

I am not for or against Paranchini, But I hope it doesn't turn out to be a Charley Foster scenario.

Could be. Myself, I tend not to look for something as complex as schizophrenia when a simple diagnosis of "demagogic, narcissistic bully" explains everything.

Many, many people are uncomfortable with Hooser taking HIS position, so is Mason against him being on the Council?

Mason has made his living teaching leadership for a long time. Do his teachings include "make everyone comfortable at all times?" If so, I think his definition of leadership is off from the start.

What did Lukens say in response to your comments about the tactics and smears of her followers?

Mason was taking issue with the "uncomfortableness" gripe and not echoing it. Mason was supporting Parachini. Reading comprehension, folks.

Joan, don't stop. KKCR now Luken's calling you out. They're trying to play their little game with you n turn to a bad person. You're not. U spoke out loud for the silent majority. The silent majority won the most in the 2014 elections. This means the majority of the public agrees with you.

U let your guards down, is what they want. don't stop until the fistee's have nothing left. Remember, they started it, don't let them forget it. Luken, just played one on you.

I like you and your writing just the way it is. You call bullshit when it is needed, you call people out no matter if they are supposed to be on a side you like like reducing pesticide use when it seems the truth is being stretched beyond the beyond,or when people are not acting right. My hope is when you see improvement you write about it, when you see bullshit you write about it. Nothin but the truth .

Paranchini could be an opportunist like most of the people the Mayor has surrounded himself with.

Ignorance does not escape a mind imprisoned by it limits.

What's a "fistee"? i do not understand the derivation of the word, or even exactly who it refers to.

if there exists a "fistee", does that mean there are "fistors" as well?

It's derived from Gary Hooser's call for a "million little fists," and refers to his more fervent followers.