After watching “Aina: That Which Feeds,” a friend emailed to ask: “Did you notice that the 'Documentary' started with a disclaimer?”

I did indeed. And it made me wonder why filmmakers and producers would be involved in a “documentary” that didn't reflect their views. So what, were they hired guns, paid in part by Joan Porter of Kauai Rising? Or just covering their asses against libel?

KKCR host Felicia Cowden was lamenting on-air that local politicians weren't in attendance at the movie premiere, like it was something important. Heck, even anti-GMO Councilman Gary Hooser didn't show, nor did he attend the anti-Roundup talk in Waimea. Could even he be sick of all the BS and drama? Or is he just smarting because he wasn't given a starring role?

Gary will be at Big Island Sen. Russell Ruderman's fundraiser this Friday night, where he's billed as speaking on “Taking Back Our Government: the Why, the How and the Hope.” Gee, do you suppose he might cover how we can take back our government from self-serving ideologues who have wreaked extreme havoc, for no clear purpose or public gain? 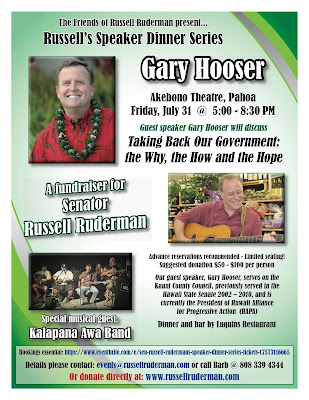 Or rescue it from nonprofits that function as paid lobbyists, at taxpayer expense and without disclosing their funding, while they simultaneously demand full disclosure from agricultural companies? At any rate, it's hard to imagine anyone would pay $50 to $100 to hear Gary, even with dinner included.

Speaking of disclosure, or more specifically, the lack thereof, Rhonda Stoltzfus has a good blog post on how Dr. Lorrin Pang has failed to turn in the financial disclosures required of some state employees. Lorrin's day job is state health officer for Maui County, though he spends extensive time campaigning against GMOs. Indeed, he's on Kauai this week, delivering anti-Roundup lectures.

Now why should we even care about this little lapse in ethics? Perhaps because Lorrin Pang has made “disclosure” his battle cry this past year. I can’t tell you how many times I sat in Maui council chambers during testimony about the GMO moratorium and heard Lorrin Pang testify about disclosure and transparency from the seed companies on our islands.

Funny, how the seed companies disclosed, but Lorrin did not.

Meanwhile, Maui folks are using the silliest strategy yet for an anti-GMO protest: a Guinness world record attempt at conch shell (pu) blowing outside the “secret” TPP meetings under way at Kaanapali. Maui activists have elevated the TPP talks to “emergency alert” status, claiming:

if TPP passes,12 major countries with 40% of the global GDP will be handing over almost all forms of protection for citizens including our rights to regulate Monsanto!!! Monsanto is a part of this deal they want to make it so even COUNTRIES cannot ban or regulate GMOs or pesticides. 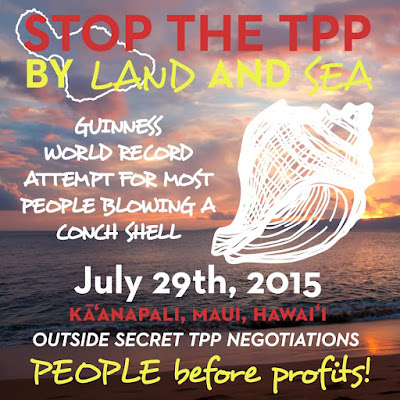 Oh, no doubt the pu blowing will prove decisive in turning those TPP talks on their ear.

Here's something far more fascinating taking place on Maui: Ae'o chicks and Akekeke (Ruddy Turnstones) feeding near the Kealia coastal boardwalk in North Kihei. The photos were taken by Walter Enomoto, and emailed over with the subject line: Something to make you smile. 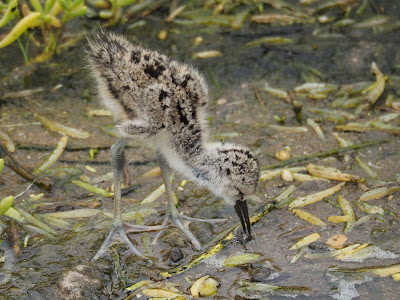 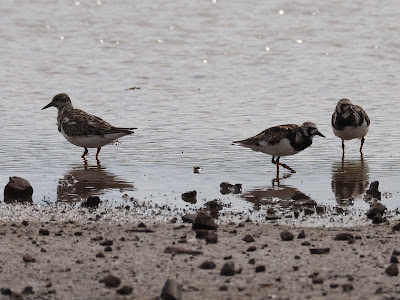 And they did. Thanks, Walter!

Something else that made me smile, or actually, laugh out loud, was this gofundme appeal from failed mayoral candidate turned failing farmer Dustin Barca: 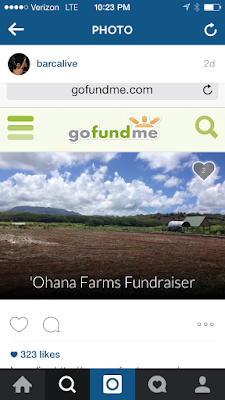 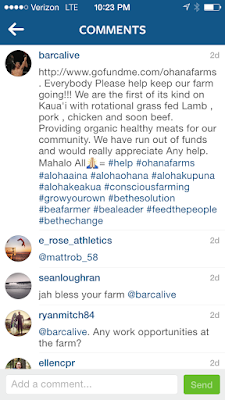 Barca's hashtags #growyourown and #help kind of conflict, don't they? The antis throw the word "sustainable" around without a clue what it means. I have yet to find a non-industrial organic farm that doesn't depend on free labor, donations, or tours to sustain itself. If they want to grow organic as a hobby, that's fine, but they need to stop the "holier than thou" preaching against real farming.

Barca stated that Ohana Farms tilled up an acre for farming. Wonder if they have the required grading and grubbing permit or the exemption that requires a conservation plan and an archaeological survey?

I'm going to get whiplash from nodding my head in agreement with you Joan, and the commenters.

And don't forget (11:19 AM and 11:51 AM) the absolutely illegal and potentially unsafe housing for the free laborers. But it's okay for the "organic farms" to break the laws. Laws aren't applicable to them.

A pu blowing event? Our resident 11 year old boy laughed so hard he fell off his chair. He has no idea just how accurate his version of the word is this afternoon.

BE STILL MY HEART! Hooser s a guest speaker for a Ruderan event. Man.,you can't make this stuff up. It's like a title from a movie..LOST!

If the FEDS and the DOJ can file charges against a US congressman then they can go after Kauai's representatives. Giterdone!

The 11-term Democrat from Philadelphia led a conspiracy that engaged in bribery, fraud, money laundering and other crimes and netted him hundreds of thousands of dollars, federal investigators said.

The indictment describes four schemes, two involving efforts to erase debts from Fattah's failed 2007 mayoral bid. The U.S. Department of Justice charged that Fattah used federal grants and donations to his educational foundations to pay back part of the wealthy donor's $1 million loan.

Why don't you ever share positive words ? If you live on Kauai wouldnt you want to take care of your home? Transplants are the loudest skwakers either for or against, just help.

At one time we had a country of "farmer wannabees" JOAN. Communities came together at harvest time and to "raise barns" and dig wells. For months our neighbors basically ran my parents' family farm when Dad was one of the last in the country to be stricken with POLIO in the 1950s. (Most of his care was provided free at the nearest Catholic hospital, in Aberdeen South Dakota, by the way.) Communities made up of small farmers are a thing of the past now, thanks to dust bowls, bank foreclosures, and of course with the advent of industrialized farming. Americans today would be too busy working 2 or 3 jobs to plant "victory gardens" -- even those lucky enough to own a home and some land. Some think that the Monsanto model of farming is the future. Other wannabees, like myself, yearn for a bit of land to plant some tomatoes, sweet potatoes, okra, peppers and eggplant.

Thanks Joan; so lovely to see the Akekeke and Ae'o photos.

To 4:16 PM: Joan does more to help than anyone. She's lifting the blinders of apathy, ignorance, and denial so that we can focus on real issues and work towards solutions to make Kauai a better place for all of us.

No worry Joan, you know you doing something right when people blame your posts but NOT the facts. Referring to "4:16pm". Get a grip on facts.

Joan why is it that right after a announcement of " sergeant Colin Nesbitts DUI ARREST. We have to hear about all his former accomplishments. Who cares , he thinks he's above the law . Drinking and driving is unacceptable. Then he refused to take a breathalyzer it should be a permanent dismissal, how can KPD guarantee that it will never happen again ?

11:14 Laws are laws, but as Kauai history has shown....certain occupations get selective treatment. IE Police, Mayor, Council and then the long list of government workers who do not get fired for illegal acts.
AND then the big violator- THE Planning Department, this group enforces some laws and lets far more egregious laws/rules get a blind eye. The new Director is leading the Planning Department down a nasty path. Try go read the NEW docs to get info on your property....complicated language (indecipherable) and then at the end of BS docs that you fill out to see if your property is legal...Mike Dahlig says "don not rely on planning Department info, do your own diligence" Too much power in too large a man.
The island is becoming a quagmire of laws that even the makers of law themselves can not understand.
Triple speak, bad is good, truth is lie, government is God.

The laws of physics will be applied no matter what anyone says. Get ready, if you can.

Does Dustin have a plan for the animals waste? Is it going to pollute a stream? Did he do an EIS? What about flies and odors?

It's sad to see this because my interaction with SGT Nesbitt was a positive one. I was speeding and was issued a ticket for it but he was very professional. If he was one of the good cops on Kauai then we lost an asset in our community.

What i do find interesting is that KPD and the OPA is keeping the cops names who ran over the 19 yr old kid. I feel that they have done a great disservice to the community and should be held accountable for their inactions. It's been over 9 months since the kid been killed. Is this another unattended death, a self inflicted death, or a cover up? I believe it's the latter just like the Lauren Kagawa murder.

For all the good people who work in public safety, keep up the good work and weed out the bad ones. We the people of Kauai appreciate your hard work and dedication to tie the line and not cross it, unlike most of your peers.


A question of conflicts
County handles investigation into death of teen, turns DUI case over to state

LIHUE — With two cases involving Kauai police officers being investigated, a conflict of interest in one prompted Kauai County Prosecuting Attorney Justin Kollar to turn it over to the state Attorney General.


“It’s not just about the severity of the charge or the people involved. It has to do with all the facts of the case,” Kollar said. “Because those cases are still pending, I can’t really get into the details of those cases.”

Kollar is referring to cases involving KPD Sgt. Colin Nesbitt, who was charged with operating a vehicle under the influence of an intoxicant and inattention to driving on May 23, and the death of 19-year-old Michael Kocher, Jr., who was killed Jan. 5 when he was struck first by a vehicle driven by a resident, and then again by a responding officer.

The Kocher case should be turned over to the AG. No one trusts the police here. Everyone on the West Side believes that this was gross negligence on the part of the police. Just like they handle all traffic accidents. Like irresponsible bullies with no duty to the public.

Wasn't this land donated from discovery? The guys who sprayed the old prince golf course with round up? Just saw him bitch about the canoe paddlers next to Malama huleia. Brah please some of those guys do it for no recognition for years, and you go once and call good people out? Here is an idea for you since you call yourself a leader why don't you round up your hundreds or thousand red shirt wearing protesters and get them to come Malama Huleia. #bethechange #bealeader #alohaaina #noneedpostlies

$150 raised in 6 days against a goal of ten grand. I think the Little League team has raised more in their campaign.