While flying across America's heartland yesterday, I was reminded of why there's “big ag.” And that's because it's a big country — something that people in Hawaii tend to forget. 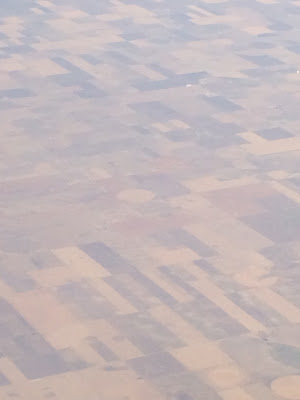 I'm here in cold and snowy Boston at the annual meeting of the American Academy for the Advancement of Science — the world's largest general scientific community. Though the program is packed with interesting stuff, the hot topic of gene editing is front and center.

This morning I attended a press briefing where six scientists spoke about the ethical, social and regulatory issues associated with gene editing and gene drives. They also touched on the implications of gene editing in animals, such as disease-carrying mosquitoes, and viruses, with the goal of driving them to extinction.

George Church, of the Harvard Medical School, said researchers and policy-makers are now grappling with this key question: “What do we determine as zero or acceptable risk to the environment versus the millions of [human] lives at stake?”

Richard Hynes, a scientist with the Massachusetts Institute of Technology, Cambridge, served on the National Academy of Sciences' international panel that recently released seven general principles for the governance of human genome editing. He said the panel agreed it would be alright to edit heritable human genes, but only with stringent oversight and to prevent and treat severe diseases — not for “enhancement.”

He said it likely would be several years before scientists are able to safely and effectively edit human genes. Meanwhile, some of the public concerns about using the technology to create a “master race” are premature.

“We have no idea how to make designer babies,” Hynes said. “It's a fantasy at the moment.”

It's also “not that easy to do this,” he noted. For example, scientists still don't know what genes govern intelligence, and some 700 genes are involved in determining height.

Josephine Johnston is part of a project with the Hastings Center in New York that is looking at the social and cultural impacts of gene editing, such as how it might affect the rights of the disabled, authenticity and identity issues, and the nature of parenting itself, especially in regard to giving parents more control and choices in their offspring.

Gary Marchant, a law professor at Arizona State University, also served on the NAS panel, which grappled with the question of international laws and regulations governing gene editing. Though science is global, laws are nation-specific, so it's unlikely identical laws will be adopted around the world. Instead, most countries are likely to focus on safety and efficacy.

Jennifer Kuzma, of North Carolina State University, said US policies need to be “bolstered” to respond to the new technology. As an example, she used the transgenic mosquito, which has been engineered to carry a lethal gene that causes larvae to die. It is currently regulated by the FDA (Food and Drug Administration), which has no mechanism for assessing environmental harms, and can't really assess the safety of processes that are designed to kill.

I asked what sort of enforcement would accompany regulations, particularly in the global sphere, and with applications that would be released into the environment.

Marchant said the NAS panel discussed that issue, and scientists had objected strongly to the concept of an international police force that could enter labs and destroy research. Instead, a more informal approach is envisioned, such as journals, institutions, granting agencies and professional societies only supporting research that complies with ethical guidelines.

Patents are another effective means for controlling and regulating the use of the technology, Church said, though patent-holders would need to register in each nation.

Kuzma said regulations also fail to take into account the “do-it-yourselfers” who are able to easily access the technology of gene drives and CRISPR.

Another reporter asked whether the “lethal gene” could be used to wipe out humans. Church said it works best with species that have a fast reproduction cycle, such as mice and insects. Furthermore, one of the first things scientists looked at in developing gene drives was how to reverse it, so that could also stop its spread through humans. “It would not be the method of choice for terrorism,” he said.

In Hawaii, there's been some discussion of using gene drives to eradicate the Aedes aegypti mosquitoes that transmit avian malaria, which is devastating native bird populations. A trial release already has been approved for the Florida Keys, where officials think the transgenic mosquitoes could help them reduce nearly all insecticides used to control mosquitoes that carry Zika and other viruses.

In an ironic twist to the anti-GMO fight we see being waged in Hawaii, where opponents are now focusing on pesticides, some Keys' residents “have vowed to hire private pest control crews to kill the GM bugs,” according to stat news.com.


So if activists can no longer use the fear of pesticides argument against GMOs, or claim they're being developed solely so multinational companies can sell more pesticides/herbicides, what will be the next bogeyman raised?

And if the technology is being used to protect endemic species — the true natives — isn't that in alignment with the concept of aloha aina?
Posted by Joan Conrow at 8:29 AM

Mahalo Joan,
It's so wonderful that you can report back on these ethical issues and help to bring about a greater understanding of the issues. You can be assured that the anti's will complain about your coverage of the 'industry'but science needs all the help a blogger can provide. You rock JC!

Thank you, Joan for this thought-provoking update.
It's going to take all of our collective wit, plus respect and tolerance for one another, to figure out how to make the world a better place. How can we find prevention/cures for disease and provide basic needs, like food and water, to the nearly 800 million people worldwide who are chronically hungry and have no access to clean water? And help the billions who don't have access to adequate sanitation?

Life is difficult. Can we please stop the antagonism and fighting within our own privileged community, be kind to each other, and get to work to find solutions to real problems?

The antis ARE sheeple. They blindly follow demagogues preaching an ideology. Many have no real knowledge of the science and issues.

And the Chem Cuckoos are cows following zealots into their slaughter.

Oh where is Gary Hooser when we really need him?

@6:07 I bet the red shirts have more education than the blue. I bet less than 1% of the blue shirts have anything more than a high school diploma. Knowledge isn't blindly following what you are told by your masters.

Does it matter when you make such erroneous statements? Why then did 4,000 redshirts march, demonstrate, intimidate others to get 2491 written and its subsequent veto overridden? Did not take a rocket scientist to figure that the bill was flawed and re-affirmed as such by local and district federal courts. Who's the sheeple or chem cuckoos now?