In honor of Valentine's Day, I wanted to share some of the "love letters from science" that I created for the Cornell Alliance for Science, as well as excerpts from a collection of quotes I compiled that reflect the dedication that many genetic engineers have to making the world a better place. 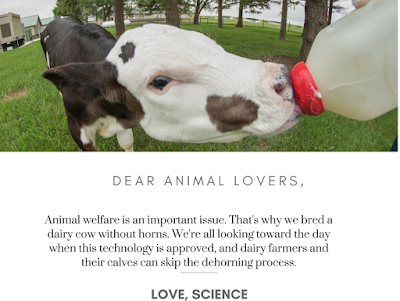 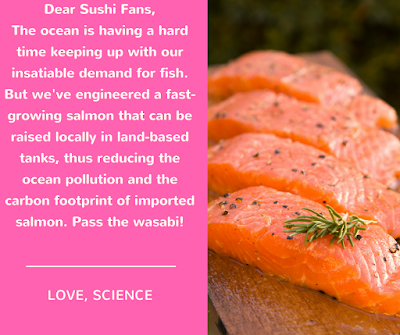 “I don’t want a future where people are afraid to use the science to get food. I want a future where all the people around the world have enough food and nobody dies from hunger.” — Luis Ventura, a biologist on the faculty of the National Autonomous University of Mexico, and an Alliance for Science 2016 Global Leadership Fellow. 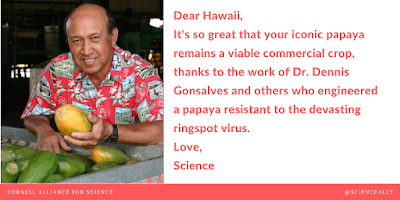 “This kind of work is not for the faint-hearted. This kind of work is for people who have a passion to help people. It was in our hearts to make a difference.” — Dennis Gonsalves, a Hawaii-born Cornell University researcher who developed a transgenic papaya resistant to the ringspot virus. 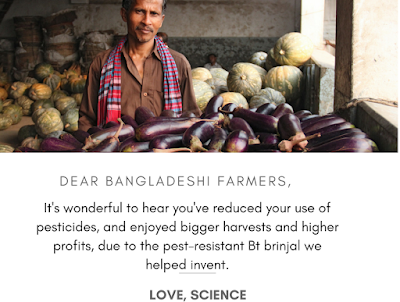 “I’ve always focused primarily on edible crops because I’m interested in helping to feed people.” — Susan Miyasaka, a University of Hawaii agronomist who chose her field after being deeply moved by accounts of global famines while attending college. 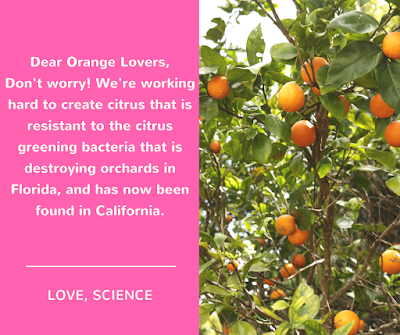 “Nitrogen is such a big problem in food production and it’s such a limitation to so many farmers around the world. If I can solve that, and increase food production in Africa, and at the same time remove one of the major pollutants in the world, I’ll be a very happy man.” — Giles Oldroyd, plant scientist at the John Innes Centre in Norwich, England, who is working on ENSA: Engineering the Nitrogen Symbiosis for Africa. 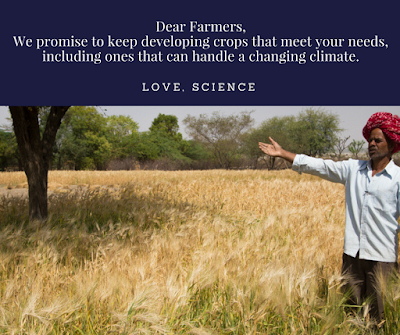 “I wanted a job that could help me develop new crop varieties in response to some of the challenges that I had faced as a farmer. That year [2009], people in Uganda died due to lack of food from the drought. I thought God had failed my crops so I could help farmers.” — Clet Wandui Masiga, 2015 Alliance for Science Global Leadership Fellow, conservation biologist, geneticist, and farm entrepreneur in Uganda.
Posted by Joan Conrow at 8:07 AM

Aloha Joan, i still see ringspot virus on papayas at food land and at friends houses from the fruit off their trees. How can they claim it is gone? Have you not witnessed this also? Always wondered why that is?

@10:02. The ringspot virus was not eradicated. The transgenic papaya are resistant to it because they carry a gene from the virus that effectively inoculates them from the disease, much the way a vaccine works. I'm told Kauai does not have ringspot, so that may be another disease you are seeing.

Happy Valentine's Day. You bring me so much each and every day. It is fortune to wish you that today.

Do you know what is lacking in public education? Science courses.

10:02 i think the ringspot thing is more internal to the tree, im not sure but if your leaves are shrivelled and look discolored and the fruit is shape funny kine then i think thats ringspot. just a poke on the papaya maybe just bird or bees bcuz too ripe on the tree
..pick big rite size green and let sit. then make papaya kalamungai, ha

Science = a million mistakes to figure one thing out.

Hallmark cards for industrial ag. I feel all warm 'n' fuzzy inside.

And when billion dollar corporations are the ones funding the "science", to increase their profits, the world needs to worry about the consequences of those mistakes.

@7:51 Billion dollar companies didn't fund the projects referenced in these postcards. They're all public sector research, except for the salmon.

Yeah, you can keep your "franken-salmon."

Emerging contaminants = compounds that were once thought to be safe, but which scientists now believe may pose a danger to human health.

@1:18-- Yeah just keep eating the imported farm-raised salmon from Northern Europe. It pollutes the ocean and contributes to global warming but you can remain smug knowing it's not GMO.

Only line caught, wild salmon for me please; no color added either

2:/14 @ 8:32 belittle science until you turn on your light or electronic device or hop in your car or flush your toilet or do anything that makes your life so much better than when people believed that the world was flat.

@ 1:18 PM Nothing "franken-salmon" about it. It just reaches adult size sooner, reducing the impact on the environment. And that's a good thing - if you want healthy seafood in your future.

See Joan, how the antis are so "progressive" that they've become the altrt?

Alternative facts like cigarettes are safe? Those scientist thought they were right too. Your postcards remind me of the Marlboro Man ones, they were cute too. Kind of like history repeating itself only with know it all zealots working for free. (wink, wink)

cigarettes are safe??? The discovery of the link between cigarettes and lung cancers became apparent in the 1930s and was confirmed by animal studies a short time later. Prior to the 1930s, people didn't live long enough to get lung cancer. You can thank big pharma, the industrial revolution and big ag for increasing human's life expectancy to beyond our 20's.... Now people can live long enough to get lung cancer if they choose to smoke cigarettes...

I absolutely hate the antis revisionist history and alternate interpretation of facts.

2/16 @ 7:57 AM, you seem to have missed the history lesson, "cigarettes are safe" came from marketing and sales, it was scientists and medical practitioners who found otherwise.

Now please tell us the relevancy of your post, and be truthful and accurate.