Now that Hawaii Dairy Farms has pulled its EIS, opponents are slathering at the opportunity to drive a final stake through the heart of the project.

Though HDF issued a press release vowing “we're not giving up,” it's unclear whether it actually can answer the concerns raised by the Office of Environmental Quality Control. One thing, however, is clear: it would be virtually impossible for a non-philanthropic entity to engage in this lengthy, costly, contentious process. So if this project dies, it's unlikely we'll see any new dairies in Hawaii — especially the small ones about which opponents rhapsodize.

And that will suit many just fine, even as they continue to preach the hollow doctrines of food security and sustainability.

Perhaps an operational missile interception site will be more to their liking than the “industrial agriculture” they revile. No nasty flies, pesticides or manure to worry about. And it sounds like Schatz and Tulsi are down for it.

Despite all the anti-ag activism, I'm beginning to think that it might actually be possible to feed Hawaii, seeing as how the antis have very low standards when it comes to locally grown produce: 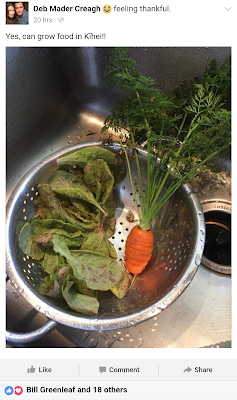 Now that's some sorry ass lettuce. But hey, if she's happy with it....

After catching flack for pursuing legislative bills that harm farmers, Hawaii Center for Food Safety has changed its messaging, if not its actual strategy or goals: 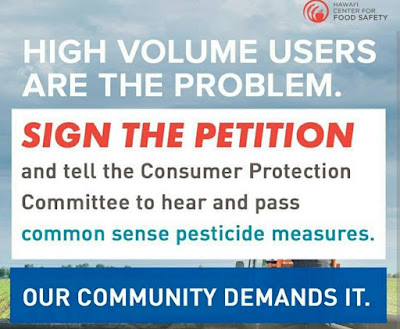 Meanwhile, CFS continues to ignore the fact that homeowners misusing pesticide products are the real, true problem. After all, they caused nearly all the school evacuations, and they are the reason why Oahu's urban streams have the highest pesticide levels in the Islands. Shoots, even the pesticides supposedly found in hair samples taken from Malia Chun's kids came predominantly from domestic sources.

Rep. Lynn DeCoite, a Molokai Hawaiian homestead farmer and vice chair of the House Agriculture Committee, touched on this point in a Maui News commentary:

Punish those that do wrong. I fully agree with that. Fine them — fine everyone who breaks the rules. But if the evacuations of schools were caused by pesticide use by homeowners, then why are we turning the blame on others?

In order to keep our communities safe, we need to know who and what to keep them safe from. And it is the responsibility of everyone in a community to know how to use pesticides safely. This is why I feel these regulations should apply to everyone.

For this bill [HB 1571], and many like it, the real focus should be education and prevention. Let’s not jump the gun. This could be the difference between our food being sustainable or not.

I continue to be fascinated by the process of idealizing and romanticizing agriculture and sustainability in Hawaii. It's led to some really amazing revionist history and super creative alternative facts, while deifying demagogues. Most recently, we see this dynamic at play in a short film eulogizing Molokai. The narrator intones:

Molokai is now positioned to chart the way forward for the planet by developing new models of sustainability based on the indigenous wisdom of ancient Hawaii.

Really? Is anyone anywhere actually looking at Molokai as the model for anything? If the planet's future depends on Molokai charting the way, we're really fucked.

The piece prominently features Molokai activist Walter Ritte, who is slated to be the subject of his very own documentary by the same filmmaker. It includes Walter's unintentionally amusing comment:

And then we have these outside forces coming in and they want to change things.

Funny to hear Walter grouse about that, seeing as how much money he's raked in from the “outside forces” funding Hawaii SEED. These same “outside forces” have also bankrolled AINA, Poisoning Paradise, Island Earth and the other anti-GMO, back to the 'o'o videos circulating among the “aloha aina” crowd, which is itself comprised largely of “outside forces” who moved to Hawaii looking for their little piece of paradise.

Of course, Walter has his cash cow — and in upcoming days I'll be delving deeper into the money that's flowing into the Hawaii anti-GMO movement. So why should he be concerned about destroying economic opportunities for his fellow Molokai residents, many of whom are acutely aware of the reality that the seed companies, government jobs and welfare are the three largest “employers?” As this Hawaii Business report noted:

“There was always something else. When pineapple closed, the resorts were there. When the ranch closed, Monsanto was still there. There was always an answer. We don’t have the answer now.”

Guess she hasn't heard that Walter's got it all nailed down.
Posted by Joan Conrow at 8:25 AM

Hope Walter is claiming all his secret income and gift neighbor island trips on his IRS tax filings.

And has anyone checked to see if he's been registering as a lobbyist? Cause he sure meets the criteria for a lobbyist. Or maybe like Babe against Biotech Nomi Carmona, who was finally busted, he doesn't think the rules apply to him.

they don't plan to sell the milk on Kauai anyway

That's not true. It will be bottled on Oahu and sold on Kauai.

They plan to sell the milk on Kaua'i and all the main islands, after interisland shipment to a facility that can do the pasteurization and bottling. Less than 5% of the state population lives on Kaua'i, so about 95% of Hawai'i milk consumption is on other islands, meaning that milk would have to be shipped regardless of where it's processed. Meanwhile, the most recently operated milk processing facility on Kaua'i, the Meadow Gold one in Puhi, has been shut down and would need a million-dollar renovation just to get it up and running again (see the final EIS document at health.hawaii.gov, section 1.7.4, for a detailed discussion of the Kaua'i processing option).

Meadow Gold shut down the Puhi facility because it wasn't cost-effective to operate, and there's no indication that the economics would be substantially different if it were to re-open.

Maybe they should use the Julian Date system for milk like they do for eggs. Distinguishes between the pack date and "use by" date.

Wasn't the big fist the prior director of the Office of Environmental Control? I see his fingerprints all over this. Hooser, that buggah. His reach is long.

"If the planet's future depends on Molokai charting the way, we're really fucked."

Still waiting for Civil Beat to report on the dairy EIS situation. Silence is getting loud.

Improving the outlook for "The Welfare Island" would be most welcome. Somehow, I'm not sure Ritte and his groupies can pull it off.