As the Kauai anti-GMO forces continue to shred one another over money and celebrity access, they're confirming everything I've reported about how Hawaii activists were used as pawns by mainland groups.

The most recent spat started when Fern Rosenstiel gushed over Pierce and Keely Brosnan at a sparsely-attended Los Angeles screening of an anti-GMO propaganda piece that Keely produced with attorney Teri Tico: 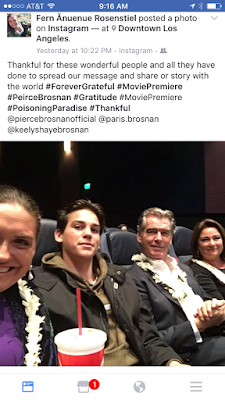 This folly earned the wrath of Kaiulani Mahuka, who rightly recalled how the Brosnans had diverted water from the late Cathy Ham Young's taro patch for their landscape ponds, leaving her loi high and dry. And when she prevailed legally, they appealed to the Hawaii Supreme Court. Correction: The Bosnans prevailed in legal action, prompting Ham Young to file an appeal. Not to mention how the Bosnans blocked access by planting the public beach in front of their North Shore Kauai vacation rental: 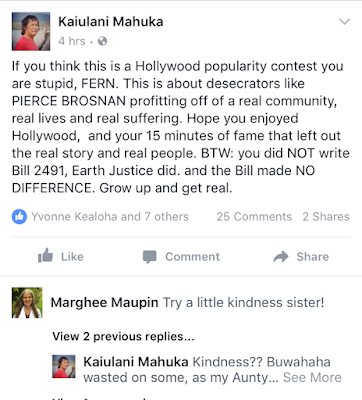 Yes, just as I've been saying all along, the Hawaii anti-GMO movement is not and never has been a homespun, grassroots effort. It was orchestrated by Earthjustice and Center for Food Safety, which relied upon Paul Achitoff and Andrew Kimbrell, respectively, to write a bad bill that, as Kaiulani points out, made NO DIFFERENCE — except, of course, to the fundraising efforts of those two groups.

When the courts ruled that county laws were pre-empted by the state, the two groups were able to use that decision to solicit donations to continue the fight they started, and surely knew they would lose.

While some of the actvists are waking up, others continue to pander and pose, most notably Maui Rep. Kaniela Ing. He and another anti-GMO pawn, Councilman Alika Atay, are quoted in a terribly biased Huffington Post piece that calls on people to “'bring your emotions and stories to overcome the political skill,' power, and government-corrupting influence of A&B” at the Commission on Water Resource and Management hearings later this week.

Yeah, no need bring facts. Just emotions and stories. Because that worked so well in demonizing the seed companies and frightening people about non-existent pesticide risks. Surely CWRM can be similarly swayed to make a bad decision, if enough folks cry and rant.

The article shares this nugget:

Ing believes that Maui’s “agricultural future must be centered around leasing small plots to small, innovative farmers and allowing shared equipment though co-owned ag parks. Let’s democratize the plantation. We have an opportunity to set an example of self-sustainability for the world.”

Yet with no trace of irony, the article then quotes Maui Councilwoman Kelly King:

“My biggest concern with A&B’s “plan,” and I use that term lightly, King observes, is that it ignores the essential question of who is going to do the farming? Not one acre has been leased to a local farm. We need a system that we can trust.”

But somehow King and Ing believe that the lack of farmers will not be an issue under Ing's model. Or maybe they're counting on a whole new group of dreamers, recruited by Atay:

Looking at Standing Rock, whose flame is being dispersed to ecological struggles by native peoples around the world, Atay, in his barrel chested voice, proclaims: “Water and earth protectors, Maui needs you.”

Poor Maui. It's now in the thick of what Kauai endured, before voters wised up and rejected single-issue, self-interested politicians like Fern and her cronies, Dustin Barca, Gary Hooser and Felicia Cowden.

“Maui is set to be an example of regenerative and sustainable agriculture,” Ing observes. “But we’re going to need some serious political disruption in order to do that.”


Uh, no, what you're going to need are some people who actually know WTF they're doing agriculturally. Unless Ing plans to use conscripted labor and government subsidies to support his miracle formula of "biofuel crops like sunflowers, local food like mangos and avocados, and hemp and bamboo for a variety of uses."

Which brought to mind this Tweet by a new farmer:

So how is is that Ing, a bureaucrat, has the hubris to dictate how farming is done on Maui, and elsewhere around the state?
Posted by Joan Conrow at 7:41 AM

I think he meant "socialize" as in the communes that have worked so well in China, Russia, North Korea, etc.

Mark Ing and the rest of them should try farming themselves before they mouth off.

It's really hard work and high risk. Ask A&B how many "farmers" have responded to its offer to lease out Maui ag land.
And if there's no guarantee of water from diverted East Maui streams, what fool would even think of making a go at it?

Sounded like that to me too.
What a great idea.

Too bad Fern doesn't realize that unless it was water that didn't come out of a plastic bottle that had been in storage, whatever she was drinking out of that cup was full of harmful chemicals.

Classy with that soda cup in the foreground and the fawning misspelled idolatry.

Fern's smile always looks a little demented to me. It's like the last thing a kid would see in a brothers Grimm story before they get eaten

Joan, amazing how when someone points out one of your errors, you quickly and publicly correct it, unlike Fern & her mentor Gary who continue to spread the Big Lie.

And how she always prints comments demeaning others against her cause but never the ones against her cause. Your a.big mouth keyboard cunt Joan! Bitter that you spent you whole life trying to be a writer and failed. You have nothing to show for it. No kids, no money, no life, nothing but a few fellow losers cheating for you.

Oh, you mean I should be publishing more comments like yours, 6:49? Ones that aren't actually against my "cause," but me personally?

Hmm, perhaps I should, since you do such a stellar job of revealing the misogyny and hatred that runs through the die-hard antis.

Of course, if I hadn't actually made it as a writer, you wouldn't be so inflamed, now would you? Burn on, buddy. Burn on.

Wow! LAULAU........6:49am. Did your dick get caught in the zipper???(I take it that you are a Man.) I am amazed at the language you use. It is part of the Human culture to demean people like how you are doing. Such strong words.........very hateful person you are. This blog brought the best out of you...really, you can rest easy now that you got the load off of your chest. What next??
To Joan...keep up the great work. It is so enjoyable to read this blog, both the positive and negative side to any issue...It is very entertaining.

Uh, sorry Mr. Ing but that's not democracy you're talking about but collectivism, something that has never worked for farmers. 8:35 you're right.

Disgusting and inappropriate comments 6:49. You should be ashamed of yourself.

Scary to learn how these antis think as they hide behind anonymity. And they claim to be all about love and caring for our community.

"Scary to learn how these antis think as they hide behind anonymity." said the anonymous commenter.

Well Fern and Nomi have been epic actresses in all of this. Of course they are Hollywood bound with their acts. gross.

Mahalo Joan for your epic writing,sorry some are so rude that the only way to disagree is to insult you with the c word. No worries, most of us love you and your writing style. Nomi or fern have no children either, like lots of women who never felt the need to mother their own children while being fabulous aunties and friends to many.
Mahalo for your courage to keep speaking truth.