If you have a chance to play poker with former Kauai Planning Director Ian Costa, grab it. Because as the owners of Hale Makai discovered, you can win the pot, even if you have a lousy hand.

As recounted in Abuse Chronicles 14-B, landowners Klaus and Ulrike Burmeister seemed to have a very bad hand indeed in 2004. They were facing a number of zoning and special management area (SMA) violations associated with Hale Makai Cottages, a four-unit Wainiha property they'd purchased two years earlier for $2.35 million. These included structures that had been built and/or remodeled without the proper permits, nonconforming structures being used as housing, an unpermitted coastal wall blocking a state easement and unauthorized landscaping of the public beach.

“Cease and desist use of the non-conforming structures as single-family dwellings,” directed the county. “Immediately stop all landscaping activities within the shoreline area,” the state ordered. “Any development without proper permits/ approval shall be demolished and removed from the subject property,” warned the county.

It was all a bluff. The game kept going until late 2006, when the Burmeisters finally sought a zoning permit for the four houses and wall.

Costa upped the ante, and told them to get a certified shoreline.

It was another bluff, and Walton Hong, the Burmeister's attorney, called it.

Costa folded on Jan. 7, 2008, and let the Burmeisters walk away with all the winnings — save for the cut paid to Hong. Specifically, Costa signed an enforcement and settlement agreement that legitimized all the violations. What's more, the agreement was not signed by the mayor, as required under the charter.

Costa could have required an SMA major permit, which includes a public hearing, to determine the project's full impact. He knew the property was being operated as an unpermitted mini-motel in concert with an adjacent parcel, and that the community was outraged over the blocked easement.

Costa could have required a certified shoreline. He knew that at least one of the cottages was within the setback, if not the shoreline, and that Burmeister had ample acreage to move the cottages back from a dangerously eroding shoreline, as shown in this 2007 photo: 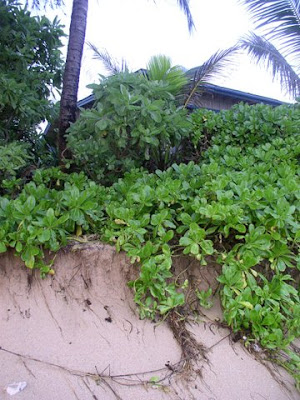 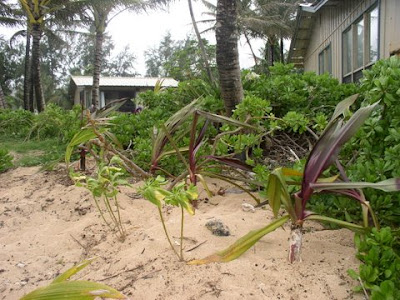 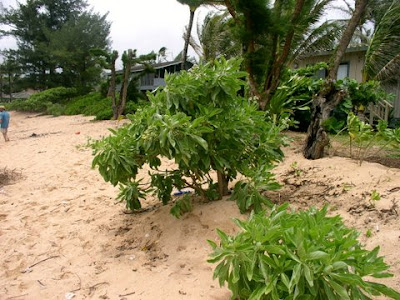 Costa could have ordered the fourth cottage torn down, and the other cottages returned to their original condition. He knew the lot is zoned for just three houses and that there were no building permits issued for the property after 1968 — even though the original three cottages and shed had somehow become “four luxury vacation rentals” by the time the Burmeisters bought it.

Costa could have limited the agreement to just the Burmeister's ownership, rather than allowing it to run with the land. And he could have negotiated public use of the easement, which was listed on both the 1993 Na Ala Hele beach access inventory and the county's 1984 beach guide.

Instead, he made just one demand of the Burmeisters: remove a section of the laundry building to meet the 5-foot sideyard setback. Oh, and once the cottage does fall into the sea, they can't rebuild it.

As a result, an easement that looked like this in 1994: 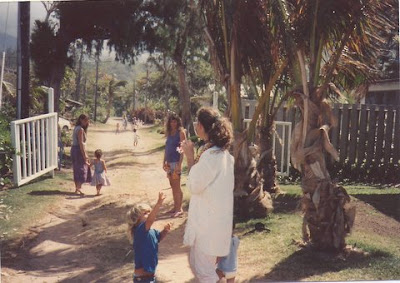 Has been allowed to remain totally blocked to the public, like this: 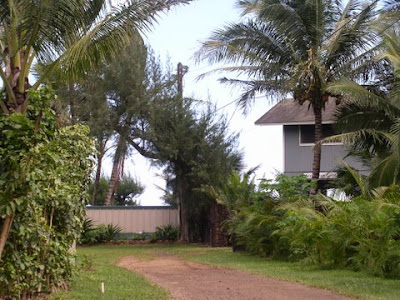 And a lot that looked like this in 2004, all nice and open with very little coastal vegetation: 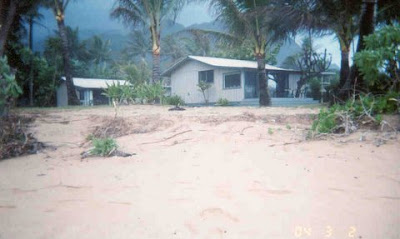 Has been allowed to remain like this, thickly planted well onto the public beach: 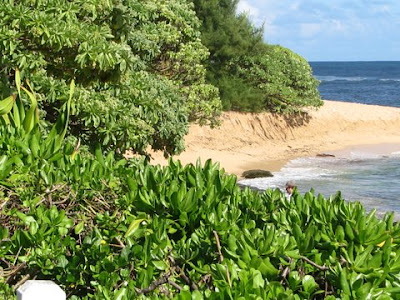 So why did the Burmeisters finally get religion, and decide, after all those years of blowing off the county and state, that they needed to get their permits in order? Well, it may have had something to do with the fact that the county was preparing to adopt an ordinance regulating vacation rentals, and the Burmeisters wanted to be sure that Hale Makai got TVR permits. We'll cover that process in the upcoming Abuse Chronicles 14-D.

Their motivation is perfectly clear. What's puzzling, even inexplicable, is why Costa gave them everything — and got nothing for the public in return.
Posted by Joan Conrow at 8:01 AM

They're stealing our beaches! The buildings that violate that law should be removed or demolished. The plantings should be removed so that the beach can be restored to the public. Cases like this should be taken to the Hawaii Supreme Court if needed.

Here's my statement to any lawyer who agrees to represent these owners: shame on you, what else are you willing to sell?!

As for Ian Costa, resign now or wait to be fired! Mr.Mayor the buck stops with YOU!

New permitting department director is same as last director, incompetent at best. Why, same mayor, no accountability. How much are we tax payers paying these clowns? Old director now a assistant director at parks and recreation. New director said it is not my fault because the files are mess. How much more are we to endure?

What are the implications of the mayor not signing off on all this? Is this the "out" needed for the County to revisit the process? Or is this just a plus for the homeowner?

How can Ian get away with this? Enforcement is a total joke.

We either have the most "lolo" government or the most corrupt.

That is the question of the day Joan. Why did he sell out the public? Or better yet, what did he get in return for selling out? He should've been fired for failure to perform his duties and outright negligence to protect county liability and public resources. Instead the Mayor protects Ian by moving him to Parks and Recreation as assistant to Bernard's campaign manager Lenny Rapozo who apparently thinks he's qualified to manage the county after his boss leaves. OMG...Kauai cannot handle another babooze "managing" the county after Bernard. Parks and Rec seems to be the holding pen for all of Bernard's cronies. So Lenny runs for Mayor and IF he gets elected, he appoints Ian to his old job as Director of Parks and Rec? Let's hope this former Planning Director is investigated to the full extent of the law and is removed from his cushy county job.

The FEDS should file charges and imprisioned these clowns.

Maybe just maybe the FEDS will be able to get their second chance when they take down the whole shabang!!!

good work joan, ive done a few insurance inspections around the alamoo/oneone area within the last 6mos so i do a small bit of research of the properties i need to visit before i go to the site. i found it unusual that a +/- 800k structure had a replacement value of less than 400k so im like..hmmm. also a quick search of the HMC shows it as 'single family residential' up to 2012, then 2013 shows TVR, but if you go to tripadvisor.com they have customer reviews back to 2005. its all public info if anyone has the time to dig .. btw your link to the ESA didnt work for me, id like to see that. mahalo for your work, dean

Thanks for your comment, Dean. The link to the ESA is slow to load, but it does work. If you still can't get it, email me at eastsidegrrrl at yahoo.com and I'll send you the PDF.

Pure, unadulterated, flagrant, in-your-face corruption. Ian Costa, Bernard “I can sing my way out of anything” Carvalho, Mike “The office is too messy for me to exercise common sense” Dahilig, etc., etc., etc. But, wait! Shaylene “Nobody is more corrupt than me” Carvalho went after a rice cooker. At least she had her priorities right. That is, get your political enemies at all costs. This is pathetic, maddening, sad, and a complete embarrassment for the majority of Kauaians trying to do the right thing. Don’t hold your breath hoping the county council does the right thing. Keep up the good work, Joan.

this lolo mayor has the backing of ALL of his appointment officials - all of them at his fundraiser last week - where he raised money for his next election and all of them ready for their re-appointment.

get ready for another four years of this type of fiascos.

so weird that you're still attacking Jake Deleplane. You got it all so wrong about him the first time. You helped win the election. What's with the bad sportsmanship? Jesus lady. Give it a rest. You're sort of obsessive, aren't you.

Fundraisers for Mayor Big B/all employees are required to attand and bring their wives or husbands,
you want to be reappointed you show up