Musings: In the Shadows

Poor Gary Hooser. He just can't accept the fact that Kauai voters rejected him. Instead, he's blaming it on the seed companies — and Hawaii News Now's Rick Daysog just lapped it right up.

Daysog, in yet another inaccurate, unbalanced hit piece on the seed industry, lets Hooser whimper about how “there's no question that the four GMO pesticide chemical companies on Kauai got together to beat me” — a totally bogus crybaby claim that led the station's “top story.”

Daysog apparently didn't know, or care, that Hooser spent more than any other County Council candidate in the history of Kauai elections, yet he still lost badly. Days obviously didn't bother to talk to any Kauai voters, or he would have known that Hooser was a victim of his own bad choices and hubris, not a seed company vendetta.

But Daysog needed some sort of drama — even though it was fake — to spice up his story on how much pro- and anti-GMO forces have been spending on campaign contributions and lobbying.

But although I sent Daysog an email advising him of the pitfalls of such an analysis, he stepped right into them. Because TV news is all about sensationalism, not accuracy or education.

He apparently based the latter solely on campaign spending reports filed by two political action committees: Sustainable Action Fund for the Environment and Center for Food Safety.

But what Daysog fails to mention — even though I pointed to him — is that the anti-GMO groups are funneling tremendous amounts of undisclosed money into Hawaii politics. We've got groups like Nomi Carmona's Babes Against Biotech and Mark Sheehan's SHAKA raising and spending significant sums, with zero disclosure. Yet we know from social media and the 2016 campaign that they're heavily involved in politics. 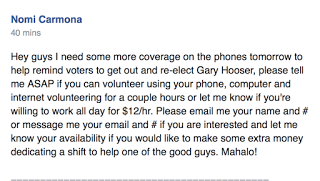 And what about the Kuleana Coalition for Change, which was offering campaign donors anonymity? According to state records, it supposedly raised only $2,694 — but distributed none to candidates. Really?

Similarly, anti-GMO groups like Hawaii SEED, Hooser's HAPA and the Kohala Center support political activities, with little or disclosure. What's more, these so-called educational nonprofits are often two years behind in filing their tax reports, and they typically don't disclose where they get their money, or how they spend it. So we don't get any sort of meaningful real-time picture of who is spending what to influence Hawaii politics with an anti-GMO message.

We've also seen the mainland-based Pesticide Action Network involved in Hawaii politics, even hiring Jen Ruggles — now a Big Island Councilwoman — to work as a lobbyist on Kauai during the Bill 2491 campaign, while pretending she was a political novice, no less. Yet PAN's involvement is not disclosed as influencing Hawaii politics, nor are the activities of Earthjustice and the D.C. headquarters of Center for Food Safety. 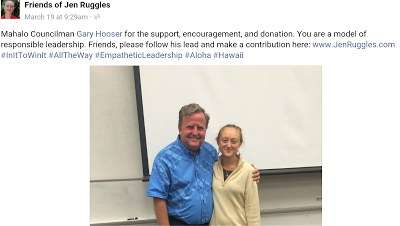 Then you've got people like Lorin Pang and Hector Valenzuela who are using their state jobs to advance the anti-GMO campaign. And Hooser isn't registered as a lobbyist, even though he certainly seems to function like one and is now, according to Daysog, raising money for anti-GMO groups.

Daysog lets Hooser claim, unchallenged, that “The amount of money raised by the so-called anti-GMO forces is minimal compared to the money spent.”

But the antis get all sorts of free and sympathetic publicity from people like Daysog and publications like Civil Beat, which still treat these groups as grassroots community organzations, and not well-funded extensions of mainland organizations.

Could anything be more hypocritical than Hooser “complaining about the influence of pro-GMO groups in Hawaii government and business,” when his own campaign was funded heavily by anti-GMO forces and his HAPA groups exists primarily to influence government, right down to training candidates?

Hooser, still smarting over references to his jowls, has grown a beard to try and hide them. But he can't hide the truth of who he really is from the Kauai voters who denounced him. It's just too bad Daysog is so clueless.

Daysog also fails to note that the seed companies are spending money to protect their operations in the face of an aggressive international anti-GMO campaign. They're the most valuable sector of Hawaii agriculture, and their presence in the Islands has a positive effect on other farming operations, in terms of maintaining irrigation and other infrastructre, sub-leasing land and creating an economy of scale that helps to keep the price of imported inputs down. They also provide good jobs, which range all the way from field worker to scientist.

What have the anti-GMO groups done, except polarize communities and cost taxpayers money? They produce nothing — nothing but propaganda, fear and political demagogues. And they do much of their work in the shadows, skirting the transparency and disclosure they're constantly demanding in others.

Meanwhile supposed "investigative reporters" like Rick Daysog keep missing the story, even when it's laid out for them.
Posted by Joan Conrow at 7:06 AM

And your writing on Saturday for the first time in a long time because, your handlers told you to? Or you didn't mention Gary yesterday and only got 8 comments?

A) I don't have handlers. B) I wrote a post just last Saturday. C) I wrote this post today, because the program aired last night. D) The number of comments on a post have nothing to do with whether Gary is mentioned. E) Glad to see you're fuming because I got right on it to correct the false impression created on Hawaii News Now! Each time you comment like this, it's a confirmation to me that I'm on the right track and must keep going. So thanks for the encouragement, albeit unintended.

Right on Joan Keep up the good work...We appreciate all you do (Most of us anyway just a few exceptions)

He's a schmuck, right? Got it.

Taking responsibility for one's actions isn't pono apparently. Hooser decided to deceive people and as more realized it, they opted out of voting for him. Every time he has to blame everyone else but himself for the consequences. Get it to your head Gary that your "movement" and downfall is nothing but your own.

Man HNN should hire you! Joan you understand the meaning of investigative work! Rick's facts and stats were all over the place in this story. He had multiple angles going but not really connecting then he buried the bigger story. Also take a look at his graphics totally misleading. HNN please have a talk with this reporter before the community loses faith in you as a fair and balanced station. Where did all the good reporters go! Sad.

He's got deadlines to meet and headlines to make, so grab facts from here and there and spin a narrative. Hey, Breitbart is the new standard for "truthiness". Why hold anyone to the facts?

“there's no question that the four GMO pesticide chemical companies on Kauai got together to beat me” But Joan this is true and to deny this is disingenuous. Yes, it is also true that he spent a ton of money and losing is his fault and his alone. But the hard core supporters of the 4 companies did in fact focus on defeating him, and succeeded.

I always look forward to a post on the antics of Hooser- the Jowly Haole who looks entirely out of place in a Sig Zane shirt- tucked in no less. He'll have to wear a cummerbund to camouflage that overhang. Lobbying life must be bringing lots of NS organic lunches his way. Too many perhaps, but I don't think they "eat light" in his organization. And if he can't see his toes anymore when he looks down, he also can't find facts in his endless tilting against his agriculture targets. (Not his "alternative facts" like some of the JFF's work.) He did not lose the election because the seed companies were against him; he lost it because the voters had had enough of his deceitful positions and posturing and the financial wreckage he so casually bequeathed to the taxpayers.

The Daysog piece was tv pablum- about as watered down, mealy and shallow as it could be. It's unfortunate because the bullshitters clog the Capitol as thick as flies and is need of a little remedial DDT. Channel 9 owes its viewers better work.

Breitbart is more accurate than anything you will read in our papers or see on the Alphabet broadcast channels. Try it sometime. Follow the links.

Love it when the real expose of the anti-GMO industry comes to light. In Gary's case the voters spoke loud and clear.

The HNN piece was so lame, they should be ashamed.

Hooser has gotten away with not registering as a lobbyist for way too long. Ethics Commission investigation time.

As far as I know Hooser has never been paid to lobby. Just cause someone testifies at legislature does not mean they qualify as a paid lobbyist who are required to register. He is doing this shit for free.

So is that how you want things to be? Make accusations and claims with no evidence?

What proof do you have that Gary Hooser is a paid lobbyist?

"So is that how you want things to be? Make accusations and claims with no evidence?"

Welcome to the anti-GMO movement.

Wasn't it Gary himself who wanted lobbyist to have to be identified?

Why do people make fun of people for the way they look? Hoosier is fat and has a weird face? What is normal. Are the people commenting beauty queens? Is appearance the only thing that matters? Seems sad. I hope for a better future for us all!

While I remain unwavered in my stance against the open air development of genetically engineered organisms and biocides, Joan, I wanted give you appreciation for your courage and for bringing to light many issues most in the Anti movement stay in the dark about. Write on. Let Freedom of Speech for all prevail. ALoha

I only know a few things:
First, there was no advertising by the seed companies to go after Hoosier. They simply advertised agriculture is good and what they are doing is good for Hawaii. All in a positive tone.
Second, Hoosier and his anti's only advertised negatively towards the seed companies with untrue claims.
Hoosier lost the election, which means he does NOT represent what the people want. The majority do not believe his shibai. Only the few blowhards that cannot shut up, still cling to the untruths, because that's all they have is untruths. It would appear the majority of people of Kauai are waking up and rising up to the truth.
Lastly, Hoosier is at the legislature trying to make laws with the same flawed facts. It will be interesting to see if the legislators are smart enough to figure out this con game.

You are terrible at this and need to find a better hobby.